According to the The Shepherds Prognostication written in 1729 you can make prognostications from the stomach and breast, which are governed by Cancer.

This relates to a man, for the breast to be without hair signifies a man to be unshamefaced and fearful, if the breast be fleshy, to be inept to learn. If hairy on the breast, to be bold but unconstant. If the belly be small it signifieth it to be of good capacity, much hair from the navel downwards, to be full of words. If the belly bears out big, he is a great feeder.
Posted by A World of Magic Myth and Legend at 07:56 No comments:

Faeries are very active at this time of year... 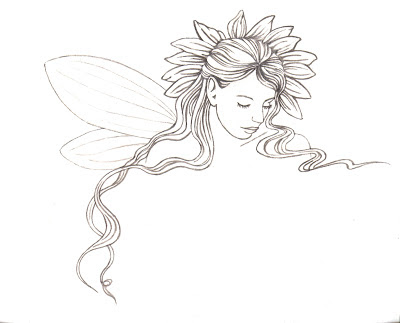 The period between Midsummer and St Peters Day, 29th June, is a busy time
for faeries and it is a good time to try and bind them to your will.
First get a large square crystal about three inches in size and place it in the blood of a
white hen for three consecutive Wednesday or Fridays. T hen wash the blood from
the crystal using holy water and then fumigate. Take three sticks of hazel, strip the bark
and write the faeries name on it, calling it out three times as you do so, on every stick. Bury the sticks
under a faerie hill, the Wednesday before you call her, and the Friday following call her
three times at either three, eight or ten o'clock. Before you call be sure that your are
clean without and within, and turn your face towards the east.
When the faerie appears bind her in the crystal.
Posted by A World of Magic Myth and Legend at 02:35 No comments: 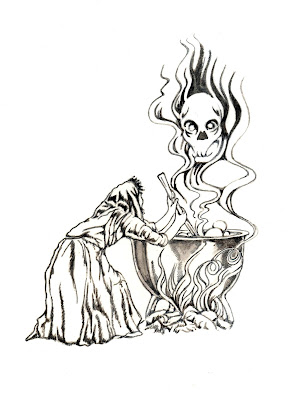 On Midsummer Eve, a night that is one of the most uncanny and dangerous
of the year (after Halloween of course!) you need to protect yourself against not
only faeries but evil spirits and witches. Midsummer Eve is sometimes known  as
Witches Night, this harked back to the days before the civil war but with the
coming of the puritans these practices and beliefs were discouraged.

To protect your house and beasts against them, collect the herbs St Johns wort,
mugwort, plantain, corn marigold, dwarf elder, yarrow, ivy, vervain, and orpins;
before dawn of 23rd June while the dew is still on them. Fashion them into garlands
and hang over the doors to your home or burn them on the midsummer fire ( which should be lit as soon as the sun sets)
this will drive off the evil spirits and protect you and your home.
On the night before midsummer, at midnight,walk seven times around a church,
clockwise, casting hempseed about you and chant:

If you look over your left shoulder after doing this you will see the image of your
future partner following you.
Posted by A World of Magic Myth and Legend at 02:53 No comments: 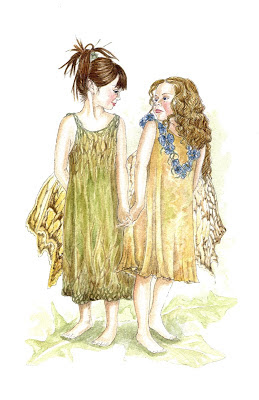 Be sure to keep your house clean now that midsummer is so close as according to John Aubrey author  of Remains of Gentilism 1688
"They are wont to please the fairies (that they might show them no shrewd turns) by sweeping clean the hearth and setting by it a dish whereon was set a mess of milk sopped with white bread; and did set their shoes by the fire, and many times on the morrow they should find a threepence in one of them. But if they did speak of they never had it again."

Farewell rewards and fairies
Good housewives now may say
For now foul sluts in dairies
Do fare as well as they
And though they sweep their hearths no less
Than maids were wont to do
Yet who of late for cleanliness
Finds sixpence in her shoe?
The Faeryes Farewell 1625 Richard Corbet
Posted by A World of Magic Myth and Legend at 06:11 No comments: 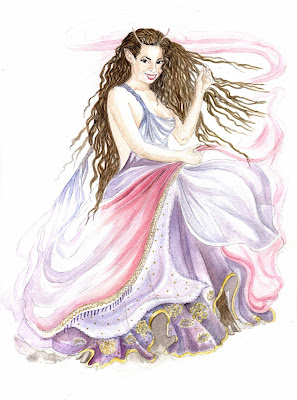 The Glaistig is part alluring woman and part goat, she hides her cloven hoofs under long flowing gowns and uses her good look to entice men to dance with her. Once exhausted she feeds upon their blood. But on a gentler note she is kind to children and animals ( it's obviously just men that she has a problem with!)
On the island of Iona, women leave offerings near the hollow rock where she lives. Fresh milk is left on the Glaistig Stone every evening and in return for this kindness the Glaistig will guard their livestock during the night.
In Lochaber, Scotland, a Glaistig was once caught by a local smith, he refused to release her until she gave him a herd of cattle. The cattle duly appeared but the smith was not satisfied, he demanded a house be built that neither enemy or faerie could harm.
She summoned all the goblins from the surrounding countryside and they set to work building the house for the smith. It was completed in one night, the last piece was put into place just as the cock crowed. The goblins disappeared but not the glaistig as she was still a captive of the smith. She offered her hand to complete the bargain but the smith not trusting the faerie burnt it with a red hot poker. The poor glaistig ran screaming into the hills where she bled to death. The surrounding plants and ground where she fell have ever  since been stained red with her blood.
The house that she and the goblins built still stand but the smith did not prosper after wounding the glaistig, he became sick and the house was sold to pay for the services of a local doctor.

Posted by A World of Magic Myth and Legend at 01:32 No comments:

This day is the luckiest one in the year especially if it falls on a Thursday. The herb,St Johns Wort is also called St Columba; if found accidentally and kept beneath the armpit, which is where the saint is said to have worn it, it will ward off evil.
Chant this as you pick it:
Arm pit package of Columba the kindly
Unsought by me, unlooked for
I shall not be carried away in my sleep
Neither shall I be pierced with iron
Better the reward of its virtues
Than a herd of white cattle.
Posted by A World of Magic Myth and Legend at 10:47 No comments:

Dancing around the Maypole

Pic from 1918 Dorset
With this beautiful weather it has reminded me of the fun we used to have at school
practicing for the Maypole dancing, this is the sort of weather we used to have in May!
Every year it was held in the small town square where I lived, we all dressed up in our
best dresses and little white socks then set to weaving intricate patterns with the ribbons.
How we didn't get into terrible tangles I don't know, but we managed it!
The custom has unfortunately died out in the town, the maypole hasn't seen the light of
day for many years now.
May Day was always a great occasion, the first day of the Celtic summer ( didn't the
summers always seem better when we were children) and the major festival of rural
England; deeply rooted in pagan fertility.
Traditionally started with the whole village bringing in the May, a phrase which
encompassed the the month and the hawthorn blossom which was used to deck
their houses and  welcome in the summer.
After the day full of merrymaking with the maypole dancing and rural sports, bonfires
would be lit and the music and dancing would begin, and I'm sure much ale and cider
would have been quaffed!
The maypole itself was usually made from a straight piece of ash, pine or larch and
after the festivities would have been recycled either as beams or ladders.
Of course the maypole was hated by the puritans, calling it
' this stinking ydol' and was banned! But with the return of the monarchy in 1660, Charles II,
it was revived.
The May Queen  accompanied by the May King, or Green Man would dance around the
pole, starting the festivities.
Posy of flowers mixed with Hawthorn blossom were carried around the village in a
procession by the children. Muslin draped over the garland was removed only after a
donation by the householder, they would continue for miles around the cottages, farms
and the 'big house'.
In some areas May Day was also known as Garland Day.

'Good Morning, missus and master,
I wish you a happy day,
Please to smell my garland
Because it's first of May.'


Posted by A World of Magic Myth and Legend at 00:08 No comments:

Faerie Flora is available now
on my website www.magic-myth-legend.co.uk

My small faerie friends, as you can see, are getting very excited!
Posted by A World of Magic Myth and Legend at 03:33 No comments: