The Sheela na Gig is another strange carving found in ecclesiastical buildings.

Sheela na Gig is probably a corrupt version of the Irish meaning 'old hag of the
breasts' or 'of the hunkers', referring to the figure's typical pose with bent legs.
Over one hundred carvings of these strange figures have been recorded in Ireland
and over forty in Britain, many were lost here after zealous clergy removed or
destroyed the statues.
It is unsure where and when these images originated, some believe that they were
first carved in Spain and France in the 11th century and then appeared in Britain
and Ireland in the 12th century. 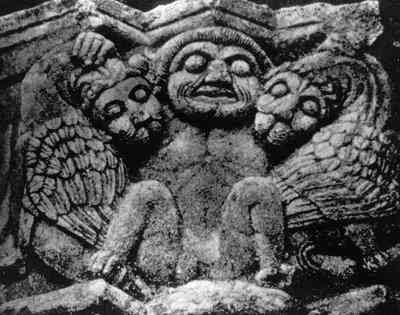 This image is from Piacenza in Italy.

The images of naked women displaying an exaggerated vulva is said to ward off
death and evil and are usually placed over doors or windows to protect the openings.
In Ireland the name of Sheela na Gig directly refers to the local wise women of the
time, otherwise known as the Hag. She would have carried on with her spell weaving
and cures despite the churches disapproval, and would have still been consulted by
the locals if they wanted to avert ill luck. Her main method of averting the evil eye
was to expose herself to the victim.
There is evidence in ancient folklore of anasyrma being used by women lifting up
their dresses to curse evil spirits. Anasyrma is the gesture of lifting the skirt or kilt
to expose the genitals. It has been used in connection with religious rituals,
eroticism and rude jokes.

Like the images of mermaids that can be found in churches, it is also thought that
Sheela na Gig images are a warning against female lust, while others believe that
she is a remnant of pre Christian fertility or mother goddess. This would explain
why there is evidence of the statues being rubbed by pilgrims, the power of the
dust from the carving was believed to have special healing powers.
The statue of the Sheela na Gig at Castlemagner in Ireland clearly shows this by
the wear on the figure, especially around the sacred centre of feminine power,
the vulva itself.

This example, one of the best preserved figures, is believed to have come from
the ruins of an 8th century church in Subulter which fell into disrepair in the 15th
century. This figure and another of St Michael can be found on either side of the
well which is dedicated to St Brigid.


Posted by A World of Magic Myth and Legend at 04:11 No comments:

The Green Man is believed to be a pagan, perhaps a fertility
figure or a nature spirit, similar to the woodwose  and yet
carvings of The Green Man can still be seen on many
ecclesiastical and secular buildings, although the true meaning
of these images have been lost. They are usually viewed as
symbols of rebirth, representing the cycle of growth each spring.
The face is surrounded by or made from leaves.
Branches or vines may sprout from the nose, mouth or nostrils
which may bear flowers or fruit.

The Woodwose  ‘wildman of the woods’ is a mythical figure
that appears in the artwork and literature of medieval Europe
and is comparable to the faun or satyr.
They are depicted as being covered in hair, images of these
wild men appear in the carved and painted roof bosses of
Canterbury Cathedral, 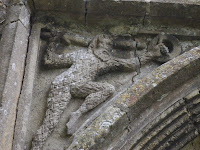 Images of the Green Man are to be
found here as well.

There are three main types of the Green Man carving.

The foliate head which is completely covered in green leaves.

The disgorging head which spews out vegetation from the mouth. 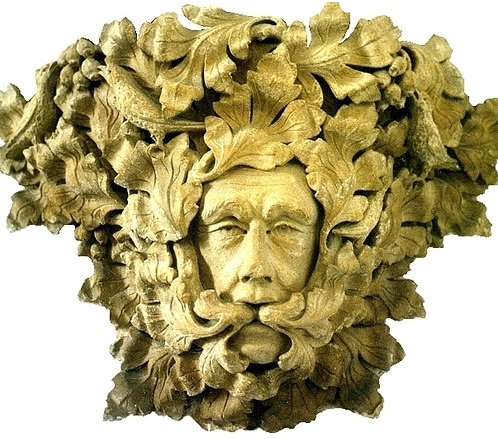 The bloodsucker head which sprouts vegetation from all its facial
orifices. The image of the Green Man do not appear in England until the
twelfth century but they have a long history elsewhere. In Rome
during the first century AD foliate heads were produced as ornaments
on temple friezes and capitals, this spread throughout the Roman
Empire. The foliate heads also appear in Indian art from the eighth
century onwards. The first image of this kind appeared in Europe
on the tomb of St Abre, near the city of Poitiers, France, 400 AD
This area saw the development of the carvings in the gothic style.
Of course the Celts already used curving twisting forms of vegetation
in their art long before the Romans invaded, images that could be
viewed as both animal or vegetation and human heads at the same time.
There are many examples in illuminated manuscripts which may
have been used as inspiration for carvings.

The Green Man image is usually found at boundaries or crossing
places, beside a church door, the chancel arch or screens. They can
also be found hiding under misericords in many churches, such as
Exeter Cathedral, the abbey-church of Vendôme, France, Ludlow
parish church and many more.

The Green Man enjoyed a revival in the 19th century, becoming
popular with architects during the Gothic revival and the Arts and
Crafts era, when it appeared as a decorative motif in and on many
buildings, both religious and secular. American architects took up
the motif around the same time. The Green Man went with the
Europeans as they travelled around the world. Many variations
can be found in Neo-gothic Victorian architecture. He was very
popular amongst Australian stonemasons and can be found on
many secular and sacred buildings.

The celebration of the Green Man is still going on today; in Clun in
Shropshire over the three days of the first May bank holiday  the
Green Man festival is held. On the bank holiday Monday the Green
Man enters Clun to battle the spirit of winter at Clun Bridge and a
May fair is held in the grounds of Clun Castle with a May Queen. 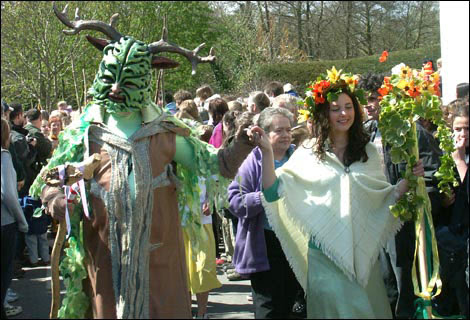 Posted by A World of Magic Myth and Legend at 04:42 No comments: