The infamous Black Shuck: Can be known as Old Shuck, Old Shock or simply Shuck
which according to the Oxford English Dictionary derives from the Old English
word scucca- meaning devil or fiend.
The black demon dogs are still a talking point in the Fens but reports of black dogs
are also found in other parts of the country.
It can be as big as a calf with red glowing eyes and is said to loiter on lonely
roads and in grave yards, hiding in the mists rising off the marshes.
If you feel its breath upon your neck do not be tempted to turn around as sight of
Black Shuck means death to you or your family. 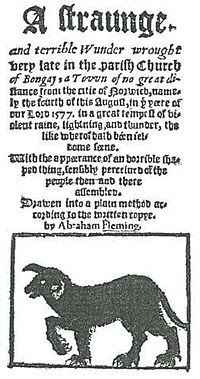 A huge black dog with flaming red eyes burst through the door of the parish
church on the 4th August 1577 during a  terrible thunderstorm. The church was full
of parishioners sheltering from a terrifying thunderstorm of such - “darkness, rain, hail,
thunder and lightning as was never seen the like”.
The dog ,once inside, began running around the church tearing at the
people within. It killed a man and a boy and legend tells that it caused the church
steeple to collapse through the roof.

Black dog of Bungay
All down the church in midst of fire, the hellish monster flew
And, passing onward to the quire, he many people slew'

As the dog ran from the church it left scorch  marks on the north door and
departed for  Blyburgh church ,about twelve miles away, where it killed and mauled
more locals.
But it is not only in the Fens that a Black Shuck has been reported, there are
many such tales throughout the country of other  demon dogs and phantom hunts.
A black dog with clanking chains and huge eyes haunts St Peter Port on Guernsey.
Its name is Tchi-co and to hear its howls is a sure sign of death, while the appearance
of the Dog of Bouley on Jersey means a storm is imminent.

Most of the folklore surrounding the sighting of a demon dog indicates that there
will be a death in your family, the black dog that guards a hidden faerie treasure at
Petit Port is an exception.

Hardy’s monument at Portesham  near Dorchester Dorset, is also said to be home to
a devil dog, this one also brings bad luck.
P.S this is not the Thomas Hardy, author, which you would think being close to
Dorchester, his home town, but Admiral Hardy who sailed with
Nelson, The Hardy of the ‘Kismet Hardy’ last words of the great man.

Tales of  a demon hunt are also prevalent through out the country, for instance the
most well known is the pack of Yeth Hounds of Wistmans Wood on Dartmoor.
This is the last remnants of an ancient woodland and is the home of the hounds.
They are a fiercesome sight, jet black, with smoke and flames snorting from their nostrils.
From the centre of the woods they start their wild hunt along with a demonic
huntsman called Dewer, they race across the wild moorland looking for lost souls
heading for Dewer Stone near Bickleigh where they disappear.
If any mortal is unlucky enough to see them it means banishment to a distant land, and
speech with the Huntsman means death.

A headless shuck leads a pack of demon dogs through the woods near Blandford, they
yelp and bay through out the night until dawn while twice year another pack is let loose by the devil around Purse Caundle to terrorise the neighbourhood.

Cwn Annwn:  Hounds of the Otherworlds.
Welsh phantom dogs which are seen as a death omen but unlike other hell hounds
they will do no physical harm to their prey. Their growling is louder when at a distance
and becomes softer as they draw nearer. 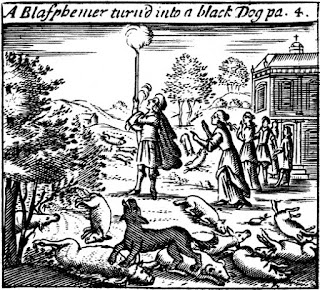 But no matter from what part of the country the stories originate, meeting or seeing a Black Shuck usually means death or bad luck apart from the The Black Dog of Birdlip
Hill,Gloucestershire, who is rather different from the usual phantom dogs which bring death to anybody that sees them, this Black Dog will aid lost travelers and guide them on their way.

Posted by A World of Magic Myth and Legend at 04:45 No comments: