The sun is out at last1

I am hoping for fine weather this weekend as I would like to go down Wistmans Wood on Dartmoor at the weekend. This is an atmospheric place and as you wander between the twisted trees and hanging moss it is possible to have a foot in either world, the world of the humdrum mortal and the wonderful glittering world of the faerie.
Wistmans Wood is the remains of an ancient woodland and is home to a pack of Yeth Hounds, jet black with flames snorting from their nostrils. They start their wild hunt from the centre of the wood led by the demonic huntsman called Dewer. They race through the woods looking for lost souls heading towards Dewer Stone near Bickleigh where they disappear only to appear another night.
But there are many other faerie kind on the moor, the pixies of Whitchurch Down and of Sheepstor, all are home to the Dartmoor pixies. 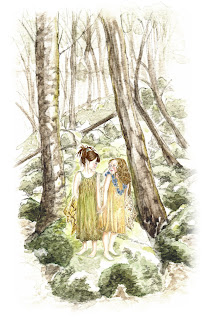 Vixen Tor is haunted by an evil witch, but that tale is for another time...
Posted by A World of Magic Myth and Legend at 12:30 No comments:

The rivers of Britain contain many different sorts of wildlife including water nymphs, with the rising waters they have more territory to explore so it is wise to avoid the fast flowing flood waters. The river Frome around Wool in Dorset is known to be the home of water nymphs and although beautiful they are treacherous and very dangerous. The monks of Bindon Abbey which was destroyed by Henry the eighth during the dissolution knew of their existence warned  the locals of their existence. One man had already met one of them while walking by the side of the river and had fallen in love with the beautiful stranger.
He was horrified when the monks told him that it was a nymph and that she had no soul. He was told that she could only survive by sucking the life from her victims. Not wanting to believe the monks he rushed to the river bank to find her. Perhaps the water nymph had sensed that the monks had warned her lover and she was never seen again. Although he walked the banks from Wool bridge to Moreton Ford every day he never saw her again. 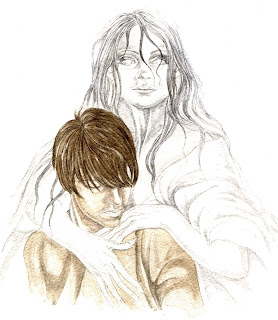 As time went on he became more and more heartbroken and eventually threw himself into the water and drowned.
Posted by A World of Magic Myth and Legend at 06:18 No comments:

Gwynn-ap- Nudd, The White One, the Faerie King 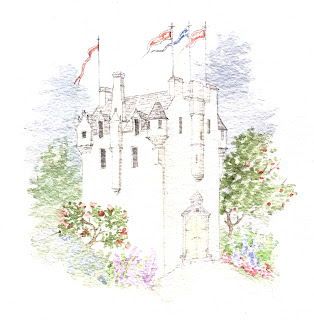 The entrance to Annwyn faerieland on Glastonbury Tor is guarded by Gwyn- ap -Nudd. His Crystal Realm is the meeting place for the dead and from the Tor he leads the Wild Hunt on Samhain. On stormy nights he is accompanied by the White Hounds of the Otherworld.

Around the 1400's a welsh saint called Collen built himself a hermit hut on the lower slopes of the Tor. He wished to meditate in peace and at that time the Tor was still an island surrounded by marshland so it was an ideal retreat for him or so he thought. He didn't realise that the Tor was already occupied by Gwynn-ap- Nudd and his court.
One day he overheard two locals talking about the Faerie King and was furious that they could still believe in such old superstitions. The two men warned him to be careful of what he said of the Faerie King as his wrath could be terrible.
Collen refused to listen to their warnings and returned to his meditations. The next day a faerie messenger appeared at his hut inviting him to a meeting with Gwynn-ap- Nudd at the top of the Tor. The same messenger returned day after day until Collen finally agreed to meet with Faerie King. But before following the messenger to the top of the Tor he slipped a flask of holy water inside his cloak. As he reached the top the familiar landscape of the Tor disappeared and appearing instead out of the mists were the Faerie halls gleaming with sparkling lights and filled with beautiful music. The Faerie King was seated on a golden throne at the end of a vast hall surrounded by faerie courtiers.
He welcomed the welsh saint warmly offering him a drink from a beautiful golden cup, but Collen knew enough of the faerie ways to refuse the wine. He took the flask of holy water from his cloak and with a sweeping gesture threw the water over the company of faeries.
Gwynn-ap- Nudd, his faerie palace and all his courtiers disappeared leaving Collen alone at the top of the windswept Tor.
But the Faerie King did not disappear forever, he is such a powerful figure that he still remains at the Tor guarding the entrance to Annwyn.
Posted by A World of Magic Myth and Legend at 03:28 No comments:

The power of herbs

The amazing power of herbs has been lost over the last fifty odd years or so and is only just now coming back into use as we all turn our backs on the mass marketed wonder drugs. 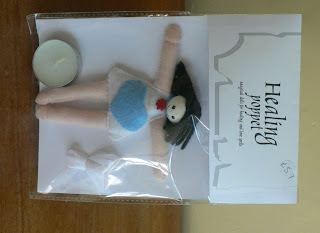 Herbs were used for everything, medicinal, protection and culinary. The lavender has so many uses it's amazing, mothers used to pin it to the clothes of their children to protect them against the evil eye and to stop them being taken by faeries. Poppets were a great to use herbs in a protective way, they have been in use one way or another since the Babylonians ans are still in use today from healing to love poppets. Methods vary, the Wiccan way is to use more herbs where the traditional way was to include hair both pubic and from the head to the inclusion of semen and mentrual blood.
Poppets ( healing and love) available complete with rose quartz and the necessary spell from www.magicmythlegend.co.uk
Posted by A World of Magic Myth and Legend at 08:37 No comments: 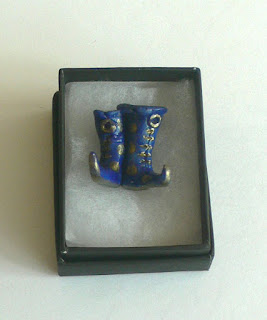 Look what we found in our house this morning! We must have had faerie visitors during the night, I thought I heard the faint sounds of revelry coming from the garden. These can be found for sale at www.magicmythlegend.co.uk buy them quick before the owners come back for their shoes!
Posted by A World of Magic Myth and Legend at 08:24 No comments:

Myths and Legends of Glastonbury 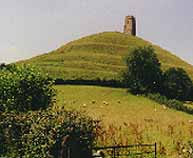 Glastonbury is a place that is oozing in spiritual and mystical forces, it is the isle of Avalon, the faerie island where the dying Arthur was taken.
Many years ago it was an actual island in the midst of the marshes of Somerset until the drainage programme initiated by the Abbots of the 13th century.
The Tor is topped by St Michael's Tower, this particular saint protects sacred sites by standing to the north of the building.
At the base of the hill is the Chalice Well, this is where the Holy Grail was hidden by Joseph of Arimathea and then found by the Knights of the Round Table.
The water from this well has special healing powers and is drunk by hundreds of pilgrims to this magical site.
There are two further wells, one to the north west of the Tor; the Elder Well ( also called St Edmund's Well ) which  used to be surrounded by a sacred grove of trees and nearby to that again, Ashwell Spring.
Joseph of Arimathea stuck his staff into the ground on the top of Weary All hill, the staff took root and grew.
The Galstonbury Thorn thrived despite Puritan attempts to destroy until recently when it was vandalised but a cutting has been planted in it's place. The original tree bloomed every Christmas and a sprig was sent to the reigning monarch each year for the festive table.
excerpt from Faeries and Folklore of the British Isles
Posted by A World of Magic Myth and Legend at 04:46 No comments:

We had a lovely visit to Muchelney Abbey last weekend, it's the ruins of a very large Abbey out in the Somerset  levels. Once one of the most wealthy abbeys in the area, due in part to the catching of eels but I am sure there must have been some other reason for their wealth. As  Glastonbury it used to be surrounded by water; an island in the middle of the levels. It must have been an uplifting  sight for the inhabitants of the area, visible for miles. Not much remains now thanks to Henry and the dissolution of the monasteries. I believe Somerset the Lord Protector took a personal interest  in the destruction of Muchelney but he was excecuted for treason shortly after so did not enjoy the results of his labour! On a walk along the river by the Abbey we were surrounded by a flock of swifts swooping and diving around us, it was amazing I haven't seen a swift for years and to be surrounded by so many so breathtaking. 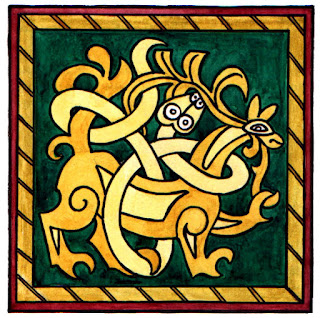 The whole area has a unique feeling to it, and Glastonbury was an important part linking the network of monasteries and abbeys together across the country. It's easy to forget amid the bustle of holidaymakers and gift shops what an important spiritual part of the country this is.
Elizabeth Andrews
Posted by A World of Magic Myth and Legend at 03:34 No comments: 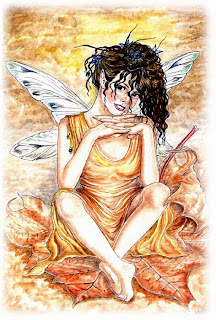 The witches Market was great fun as usual, the weather wasn't too bad and it didn't seem to dampen anybody's spirit. Many overseas visitors which was nice, Norway Japan, and several very appreciative young girls from Italy. I don't think they could believe the diversity of Glastonbury and having visited Italy I am not surprised. We had a short break in Treviso last year and there was a college in the town and as usual students were milling about everywhere but the strange and slightly unnerving thing is that they all looked like the adults in the town. Isn't that the point of being young and especially a student that you can experiment and wear all the weirdest gear you like? Seeing those young girls reminded me how strange it was. But for the market it was a great time catching up with all our friends even if business was a bit slow.
Posted by A World of Magic Myth and Legend at 07:18 No comments: