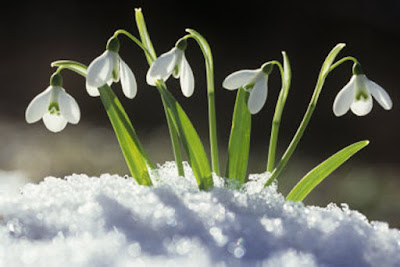 Despite the endless rain and cold, spring is at last making an appearance. Snowdrops have been pushing through the sodden earth ( what plucky little flowers!) and little green buds have been bursting from the stems and branches of the shrubs in the garden.

My thoughts  should be turning to seed brochures to plan this years vegetable plot but looking out the window at the pouring rain I can't just get enthusiastic...  so I will read my folklore books instead and dream of warm spring days.

So I am waiting for the Cuckoo to arrive, might have a bit of time to wait as it traditionally doesn't appear until April.

The cuckoo comes in April

Sings a song in May

Then in June another tune

And then she flies away

It is quite apt that the Snowdrop is also known as the Flower of Hope as we are all hoping; after the past months, for better times.

Other names for Snowdrops: Candlemas Bells, February Fair Maids, Snowbells and Snowpiercers. On the Welsh borders they are gathered to purify the house but in some counties this is a no no as they are known as Death flowers, maybe because they grow in so many graveyards and recall the white clothes traditionally worn for the death of a child. 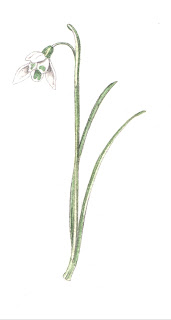 It is one of the first flowers to appear at this time of year. Its beauty symbolises purity.

'The snowdrop in purest white arraie, first rears its head on Candlemas daie'  Circa 1500

The second of February is Candlemas Day, St Mary's Feast of the Candles. Officially the Feast of Purification and the presentation of the Christ in the Temple.

When Christ was presented to the aged Simeon, forty days after his birth, he prophesied that  Jesus would be a light to lighten the Gentiles. So hence the candlelit services and processions.

Back to gardening... it is on this day that we are supposed to plant beans...don't think so! 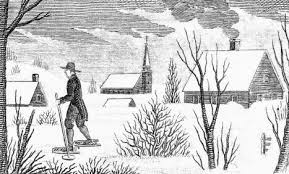 One day in February in 1799 a passing farmer noticing a handkerchief hanging on a bush, rescued Elizabeth Woodcock of Impington, Cambridgshire from the snowy hole in which she had taken refuge from a blizzard eight days previously. Drifting snow had covered her to a depth of six feet and she had become to weak to climb out; during her confinement her only sustenance was two pinches of snuff!

So avoid travelling by night in snowy weather...

"For she was all froze in with frost

But when they gave her up for lost

They found her down the hole"

One has to wonder what was in the snuff??

Posted by A World of Magic Myth and Legend at 03:47 No comments:

Queenie and Sybil, The Psychic Sisters.

Ghosts, witches, hell hounds and all manner of paranormal mysteries to get your teeth into...

The whole series of their adventures is available on Amazon either as a kindle download or in paperback. 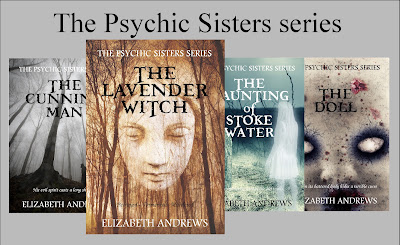 If you wish to just whet your appetite on the first in the series The Lavender Witch, it is available as a free download until the 16th of February.

Posted by A World of Magic Myth and Legend at 08:16 No comments: