Smugglers along the south west coast of England

There are many notorious tales of the smugglers and wreckers  in this part
of the country and which has inspired many novels such as the
famous ‘Jamaica Inn ‘and ‘Moonfleet.’ 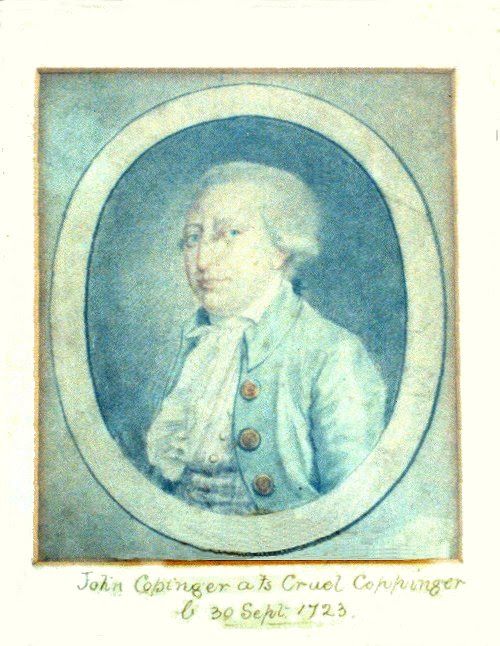 One man who during the 18thc  acquired a lasting notoriety was that of ‘Cruel Coppinger,’
the Dane, who plied his dreadful trade along the north coast of Cornwall.
Local tradition relates that it was during a terrible storm a foreign rigged vessel was
seen drifting just off the coast. The ship soon sank in the pounding waves and driving
rain; just one man made it to shore. Wrapped in a cloak that he is said to have torn
from the shoulders of an old woman who was on the shore, the stranger leaped up
behind a farmer’s daughter who had ridden down to see the wreck. She took him to
her fathers house where he was fed, clothed and made welcome. He was fine looking
man and soon won the young girl’s heart and at her father’s death which happened
not long after, he married her. But the marriage was not a happy one and only one
child was born to them, a deaf and dumb boy who inherited his fathers vicious streak.
It was even rumoured that the child murdered one of his own playmates.
After the marriage Coppinger made himself Captain of an organized band of smugglers
and by his black deeds soon earned the title by which he is remembered. His ship was
called the Black Prince and had been specially built for him in Denmark and it was
rumoured to be crewed by men who had offended him on land. They were dragged
on board and threatened with violence  if they did not sign on .

After many years plying his wicked trade along the coast near St Just he fell ill.
Several parsons and members of the local church were called to his bedside, they came
readily enough as the wicked man was by then very rich. Although it was the middle
of a bright sunny day his chamber became very dark, and one Parson claimed to see
the Devil in the corner of the room. By their continuous readings throughout that day
they drove it to take many forms but for all their efforts they could not make the Devil
leave the chamber of the dying man. At last it took the form of a fly and buzzed around
Coppinger, by then they saw that it was in vain for them to try any longer. All the time
the bible readings were in progress, the men inside the room could quite clearly hear
the sound of waves breaking against the side of the house even though it stood some
distance from the shore. While this was going on two men who were on the cliff over
looking the sea  heard a loud voice coming from the waves, it called out ‘The hour is
come but the man is not come.’ Looking in the direction of the voice they saw far out
to sea a black ship with a sail set coming in fast, against the wind and tide. No one
was visible on deck. She came closer and closer to the cliffs until only her mast could
be seen below them. Then as they watched in horrified amazement black clouds
billowed up from around her and then headed for the dying man’s house. Terrified, the
men ran back to the town square as they reached the house it shook and looked as if it
was about to collapse, and it was at this moment that old Coppinger died.
The Parsons and all the watchers rushed from his chamber and watched the black
clouds roll back towards the waiting black ship, which at once sailed away amidst
a violent lightening storm and then disappeared.
The sky overhead immediately cleared  and nothing untoward happened until it was
time to place the old wrecker’s remains into the coffin. Then as the coffin was carried
towards the churchyard the sky again became overcast and a storm sprang up with
such violence that the bearers could hardly keep their feet. They managed  to reach
the church yard stile when such violent bolts of lightening flashed around them that
they dropped the coffin and rushed into the church.
When the storm eventually abated they ventured out to retrieve the coffin but nothing
was left of it; only the handles and a few nails remained. All else had been set on fire
and consumed by the lightning.
Posted by A World of Magic Myth and Legend at 07:03 No comments: