Shute's Lane and Hell Lane, Symondsbury, Dorset are ancient track ways known as Holloways,             and are two of the best examples in the country.

They connect the tiny village of Symondsbury to North Chideock.

The name Symondsbury comes from the Old English meaning hill or barrow belonging to the man named Sigemund. It was listed in the Domesday Book as Simondesberge.

The hill relates to the nearby Colmer’s Hill, a conical mound topped by trees which is the highest point in the district. 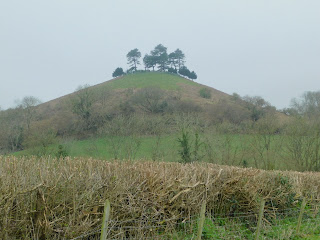 It is said that it is not uncommon for children to hear faerie music issuing from the depths of the hill. A  tale dating from the previous century relates to a young girl who was drawn to the hill by the sound of beautiful music, so entranced she began to dance and dance. Under the spell of the faerie music she could not stop cavorting around the  hillside until she eventually collapsed and died from exhaustion. 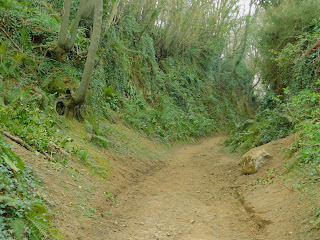 These sunken lanes are common in the west country due to the underlying rock being soft sandstone.

Worn down over hundreds of years by the passage of feet, livestock and wagons; the weather also plays an important part in the formation of these lanes, the deep sides funnel the falling rain from the surrounding land which then pours down the narrow space. At times the lanes can become a rushing stream wearing the soft sandstone down further.

Shute's Lane and Hell Lane, which are about ten  metres below the surrounding countryside, are believed to be about 300 years old although others date back centuries starting as drovers or pilgrims paths. 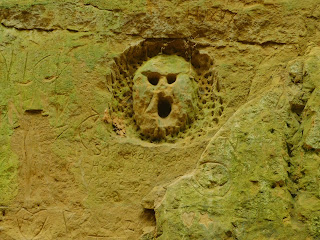 Hell Lane, deeply rutted, was believed to have been formed by the passage of wagons transporting stone from the nearby Quarry Hill at North Chideock.

Heavy carts transporting the local Forest Marble and Oolite a form  of limestone, struggled along these Holloways carrying the stone to the nearby villages.

The parish church of St John the Baptist in Symondsbury  was built in the early 14th century from this stone.

The soft stone in Shute's Lane has been carved over the last few decades by passing visitors. The results are quite amazing and well worth a visit. 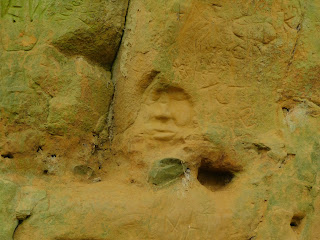 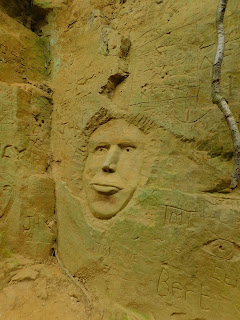 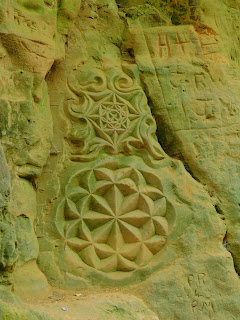 If you intend to visit these Holloways be advised to wear suitable footwear as Hell Lane in particular can be  hard going, wet and muddy.

To see the video of our recent visit follow the link:

Posted by A World of Magic Myth and Legend at 03:09