The morning sunshine beckoned Gulliver out for an adventure, little
did he know that the lovely sunshine wouldn't last!
Having to shelter in one of these strange automobiles during a
heavy hailstorm, he waited patiently for the sun to reappear. 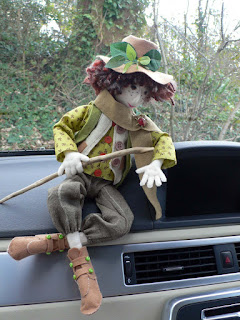 Wading through the thick layer of ice left behind by the storm he
tottered off towards Seaton beach.

Seaton a small seaside town in East Devon on the south coast
of England. It faces onto Lyme Bay, to the west of the mouth of
the River Axe, it has red cliffs to one side and white cliffs on the other.
A sea wall separates the shingle beach from the town. This is one of the
towns that sits on the 96 mile Jurassic Coast line.

Being a very small elf he found it difficult to keep his feet in the strong
winds blowing off the sea. 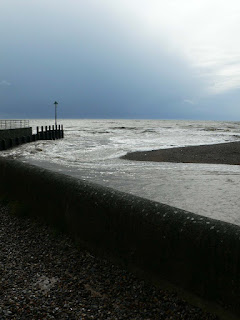 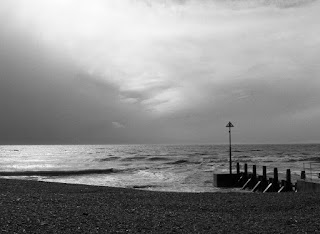 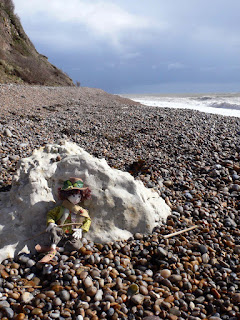 In Saxon times Seaton was known as Fluta or Fleet, the Saxon word for
creek and was founded by Saxon Charter in 1005 AD.
But there has been a farming community here 4,000 years before the
Romans arrived when it  became an important port although the remains
of the Roman occupation has been reburied to preserve them.
In 2013 a local builder unearthed the Seaton Down Hoard of copper alloy
coins, these Roman coins, about 22,000 is believed to be one of the largest
4th century collections ever found
The importance of Seaton as a port continued  for several centuries, supplying
ships and crew for Edward I's wars against Scotland and France until a
landslip caused by heavy storm partially blocked the estuary. The arrival
of the railway added to the decline of the harbour.

Posted by A World of Magic Myth and Legend at 09:12 No comments: