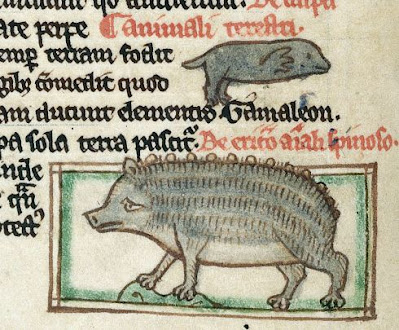 Hedgehogs are now active after their winter hibernation, scuffling through the undergrowth in the search of a tasty worm or two. We have already spotted the first hedgehog in our little village, the dogs were wary but interested!
In folklore the hedgehog is portrayed as hardworking little beast who collects apples and other  manner of fruit by rolling over and impaling it on its prickles, then taking it back to its den for the long winter. This is however incorrect as the hedgehog's diet does not include apples, or milk as they are lactose intolerant.Commonly eating invertebrates, they sometimes nibble on carrion,frogs,baby birds and birds eggs.
They do not collect food at all, instead relying on their body fat to survive the winter.
The Roman author Pliny the Elder suggests that they collect grapes in this manner in his work Naturalis Historia and from the 13th century onwards this image figures largely in illuminated manuscripts. 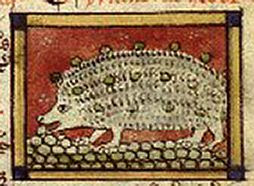 According to Finnish  legend a female hedgehog was responsible for creating the earth.
In the beginning there was no dry earth, just a never ending lake. A giant hedgehog appeared carrying soil and rocks in its prickles to form the land. 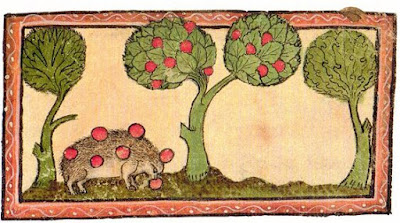 The hedgehog appears in many countries folklore; in Bulgaria it is depicted as being very wise.
In the beginning of time the Sun decided to marry the Moon and everybody was invited to the wedding, animals included. All attended except the hedgehog so the Sun went looking for it to see why it didn't attend. The hedgehog was found gnawing on a stone, so the Sun asked it was it was doing. The hedgehog replied I am practising eating rocks as once you are married you will have many Sun children. They will all shine brightly in the sky and the earth will dry up, nothing will grow and we will all starve to death. The Sun thought about this for a while, and realising the wise animal was right called off the wedding. 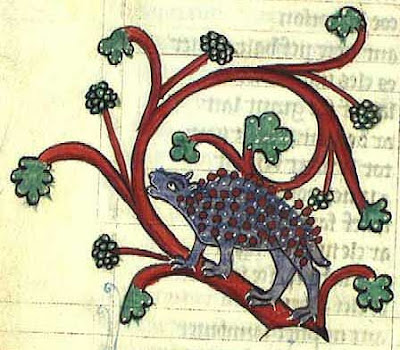 In Slavic folklore it is believed that the hedgehog can lead the way to the magical plant, raskovnik, which could be used to unlock doors and find hidden treasure. Apparently the plant is difficult to recognise and only chthonic (subterranean) creatures are able to find it.
It resembles a four leaf clover.
In some parts of Serbia the treasure was believed to be a black man in chains who once found would request that the raskovnik be brought to him. Once found the chains securing the man would break, he would disappear to be replaced by a cauldron filled with gold.
The poor hedgehog not only being wise and capable of finding hidden treasure was also regularly eaten in years past.
Traditionally a Romany favourite, wrapped in clay and put on the fire. The clay is cracked open when done and peeled back along with the prickles and skin
Apparently its a delicious, firm, white meat but quite fatty....
In 2016 Tyson sparked an outrage when he revealed that he ate hedgehog as part of his training regime.
And on that note I found a recipe dating from the 17th century in
The Fairfax Household Book....
" For a lunatic.
Take a hedgehog and make a broth of him, and let the patient eat of the broth and flesh."
To end with a cheery thought....I believe May is Hedgehog month so go on hug a hedgehog!!
Posted by A World of Magic Myth and Legend at 06:41