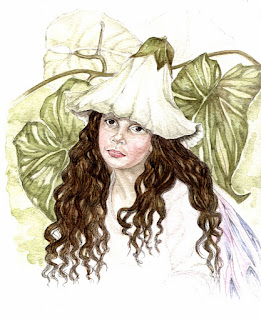 Did you know that if you pick Bindweed it will rain, so I think  this pesky little faerie is responsible for all this weather!!
Still we are English, we are used to lots of weather. The rest of the world has been watching all this weekend for the Diamond Jubilee and sure enough we had rain! But do we care? not a bit!
So three cheers for Great Britain and the Queen..
Posted by A World of Magic Myth and Legend at 13:07 No comments:

My husband was camped out in front of the stage for most of the music and was really overwhelmed with the quality and diversity of the music!
Unfortunately we didn't have such a good result with sales on the stall - perhaps a sign of the recession? tho I am not too sure about that, nobody seemed interested in the craft stalls at all. I think it would have helped if the organisers of the Packhorse Fair had a designated site for all the artisans  and craft workers. We were mixed up with the car boot stalls. I think they have missed a trick there. They could get a really good art and craft side to the fair if they put a little more thought into the organising of the event. A Farmers market was there and present was the olive oil man as seen on Dragons Den which he had proudly splurged over the side of his gazebo!! As I recall they turned him down as they thought it was daft idea!!
Posted by A World of Magic Myth and Legend at 13:39 No comments: