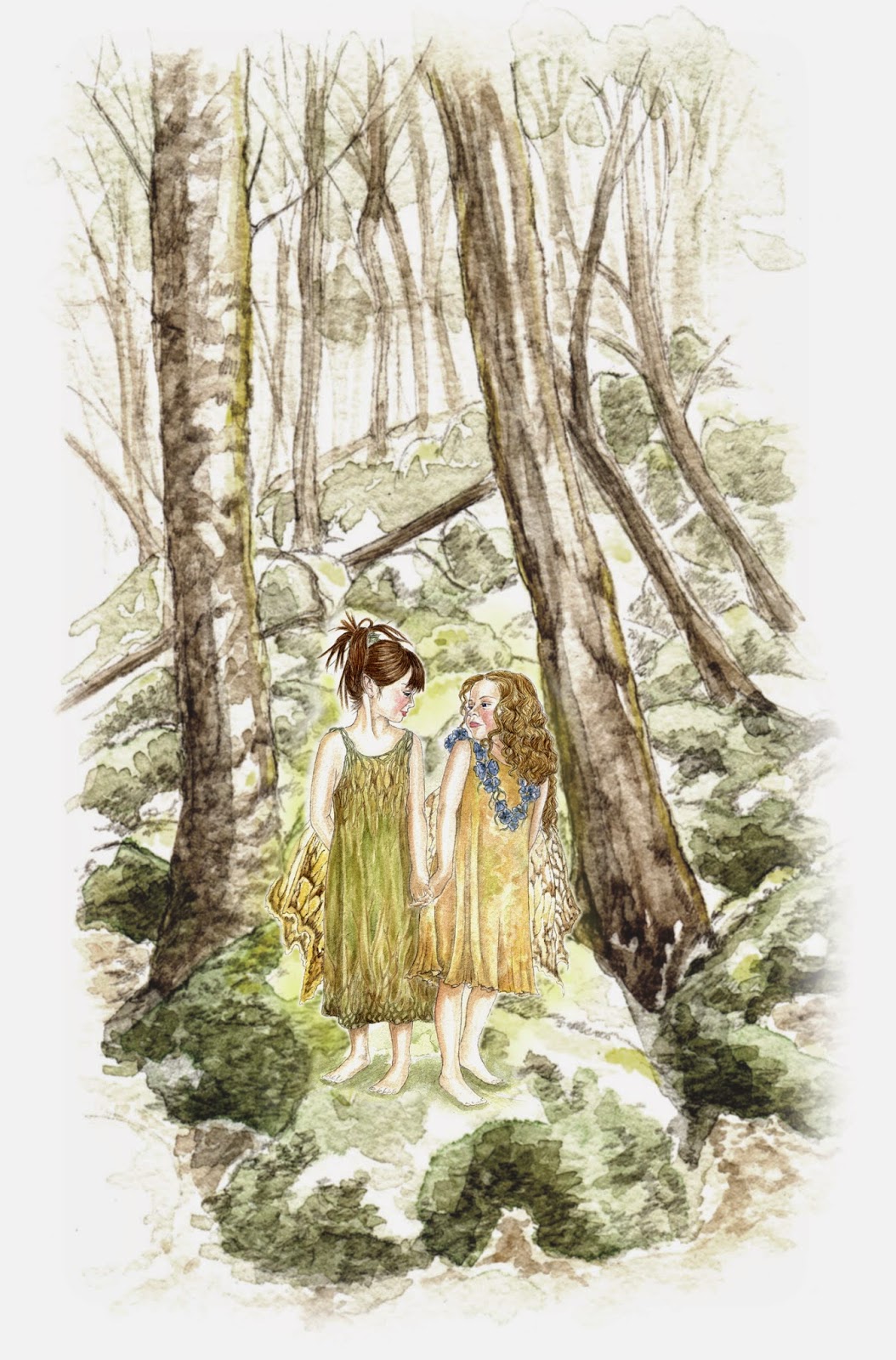 Almost all kinds of trees found in the Celtic countries have been thought to have
special powers or to serve as the abode of the faeries. 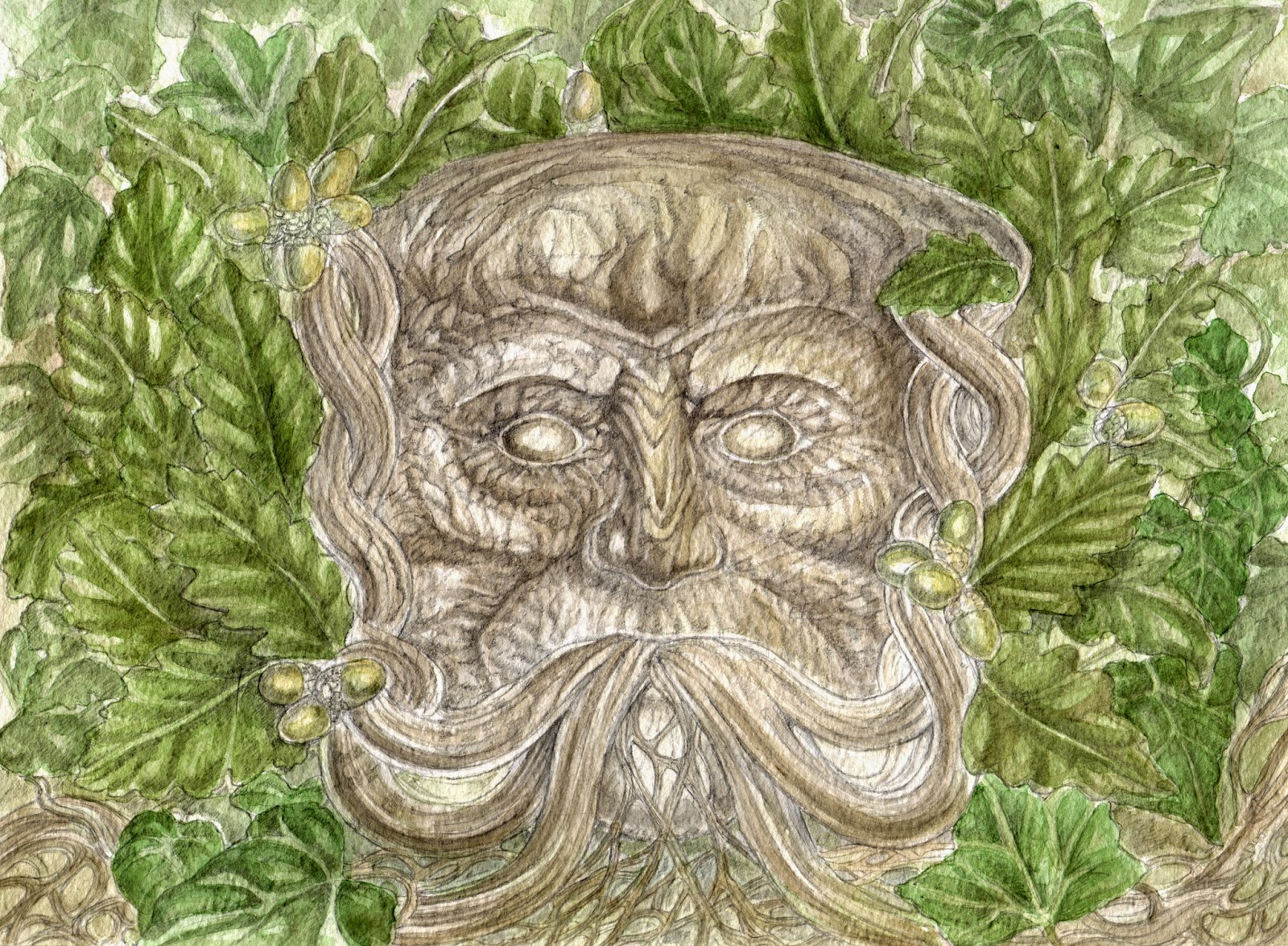 Oak
According to the Celts the oak was the Father of the Trees and worshiped in
vast groves which formed their holy shrines. These places gave protection and
power to their magic and spells. They revered the oak
above all other trees because of the powerful magic that the tree contained and it
was used in many of their celebrations and rituals. The name Druid means
‘Knowing the Oak’.
The oak represented doorways to other realms, it was believed to provide
protection and shelter when passing through to other realms.
On Angelsey in Wales stand the ancient sacred Holy Groves of the Druids, this
grove of oaks was destroyed in AD 60 on the orders of the Roman General
Gaius Suetonius Paulinus  who was determined to break the power of the Druids.
The remnants of the sacred oaks can still be seen there.
The Romans vehemently opposed Celtic druids, whom they did not see pious priests,
but as ferocious freedom fighters. The Druids continuously tried to rally the
population of Britain to take up arms against the Romans and Anglesey became the
centre of Celtic rebellion in the country.

Oak Apples: The galls on oak trees are caused by the larvae of a certain type
of wasp and the galls were used to find out if a child had been bewitched.
Three of the galls would have been plucked from the oak and thrown into a
bucket of water. The bucket would then have been placed underneath the child’s
cradle. If the galls float then the child is safe but if they sink it means the child
is bewitched. All of this must be done in silence otherwise it will not work. 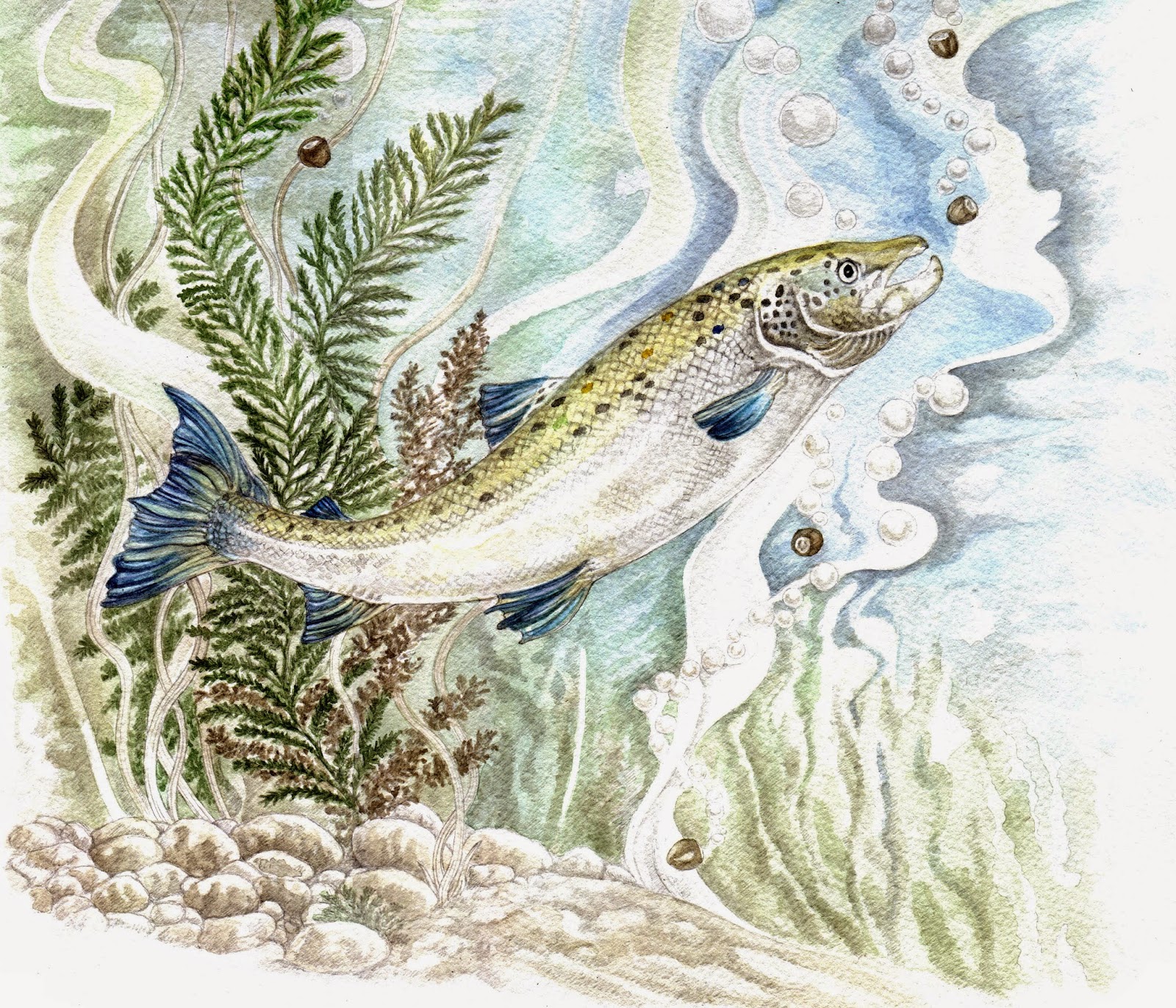 Hazel
The Well of Wisdom, otherwise known as Connla’s Well in Tipperary Ireland,
stands at the centre of the Celtic Otherworld. From here flows the water which
feeds all other sacred wells and springs throughout the rest of the world.
Overhanging this well grows a sacred hazel tree which produces the nine nuts
of poetic art and wisdom, these nuts fall into the water and are eaten by
Fintan the salmon of knowledge.
When the nuts fall into the water bubbles of inspiration rise to the surface
which with the husks then float down the five streams that flow from this well
spreading the wisdom to the rest of the world.
The hazel tree has been considered a magical tree for many hundreds of years
and to the Celts it was known as the Sacred Tree of Knowledge and it’s nuts
treasured, believing them to be the food of the Gods.
It was not just the nuts that they valued but also the wood itself from which they
made wands, using them in magical ceremonies and for divination.
The power of the wand has been recognised by Pagans and Christians alike, for
example it was with a hazel wand that St Patrick drove the snakes out of Ireland.
Along with the wands, which are still used by the modern day Druid, hazel
dowsing rods are commonly used to find underground springs,
although in Cornwall they are also used to locate mineral deposits.
Great care has to be taken to cut the wands or dowsing rods at the the correct time.
Midsummer’s Eve is the best time as the hazel tree is at its most powerful then.
The smaller more flexible branches of the tree are woven into hats, placed upon
the head they can then be used to make wishes.
Sailors also wore these hats as protection against storms.
This belief in the power of the hazel was and is still wide spread throughout
Britain; in the more remote parts of the country it is still a custom for brides to
be presented with bags of nuts upon leaving the church to encourage
fertility in their marriage. Yew
This is an ancient sacred tree which can live for anything up to 3000 years,
its evergreen leaves a symbol of mourning and resurrection. Many yew trees
can be found  planted in graveyards, and small sprigs of yew were often placed
in the grave to protect the spirit.
One old tale that is told about the yew is that the tree became dissatisfied with
its dark green needles envying the other trees in the forest their beautiful
coloured leaves. It grumbled to the faeries asking them to change its appearance,
so to keep the yew happy they changed its leaves into gold. The golden leaves
glittered in the sun but this attracted the thieves and they stripped the tree bare.
The faeries then gave the tree delicate leaves of crystal but a storm came and
the rain smashed the delicate leaves leaving the tree naked.
The tree was then clothed in bright green and gold leaves that fluttered in the wind
but this attracted all the wild animals of the woods, and the tree was again stripped
bare of its leaves. The yew tree stood there in the wood and moaned  for its own
evergreen leaves to be returned  so the faeries once again did their magic and
returned the yew tree to its original form,but because the tree still envied the
other trees their colourful leaves the faeries gave it bright red berries to wear
every year, and made the berries along with the leaves poisonous to discourage
the beasts of the forest.

Elder
The elder, having clusters of white flowers and red or blackish berry like fruit, has
many associations with the faerie world. For instance on the Isle of Man it is
commonly thought of as a faerie tree while in Ireland it is believed that the tree is
haunted by faeries and demons.
If you stand beneath an Elder tree on Midsummer’s Eve you will see the King of the
Faeries and his entourage but be careful you do not get swept away to Faerieland.
Elder wood is greatly prized by the faeries so do not use it for a cradle or the
baby will be pinched black and blue.
The Elder Mother guards the tree and although she is usually kind she can
become dangerous if her trees are harmed so you must always ask
permission before cutting an Elder tree.

”Ourd  gal, give me some of thy wood
An oi will give some of moine
When oi grows inter a tree” 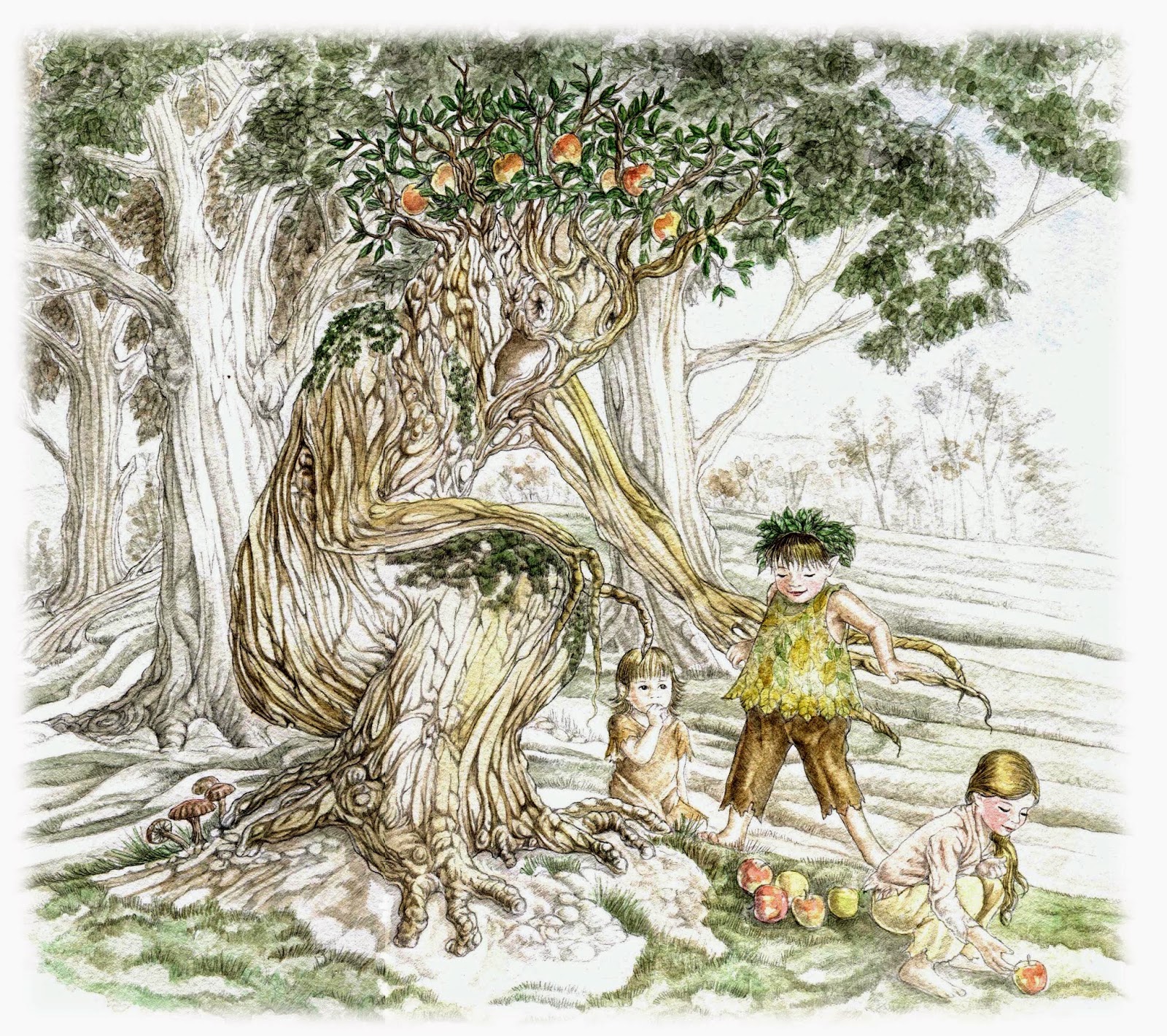 Apple
The magical properties of the Apple tree were recognised by the Celts who
used them in their Samhain festivals.
Great care was taken of the trees by the Celts, wassailing them at the turn of
every season to ensure good crops, for they believed that the apple was the the fruit
of the Gods. Blessings and prayers were said in the orchards and hot spiced cider
drunk in toast to the trees.
Anything left over in the wassailing bowl would be poured over the roots of the
trees as a tribute to the spirit of the trees.

“Old Apple Tree we wassail thee, and happily thou wilt bear,
For the Lord knows where we shall be ,
Till apples another year....”

Two customs that are left over from the Samhain festival and are still in
practice today are the dunking for apples in a barrel and peeling an apple in
front of a mirror to see an image of your future partner.
May Eve is the traditional time to plant new trees, place a piece of coal beneath
the roots, then water with cider.
The Apple Tree Man is the guardian of  orchards in Somerset, he is to be found in
the oldest tree. Also keeping him company is the faerie horse, the Colt Pixy.
The last apples of the harvest must be left for the pixies. The Somerset name for
taking these are Pisking, Col-pixying, Griggling, Pixyhunting and Pixywarding.

Ash
The ash tree was regarded with awe in Celtic countries, especially Ireland; where
at times in the past, even though wood was scarce, people refused to cut the ash for
fear of having their own houses consumed with flames.
The ash is sometimes used in the Beltaine rites, together with the oak and thorn,
the ash is part of a magical trilogy in faerie lore.
Ash seed pods can be used in divination and the wood has the power to ward of faeries.
In Scotland children were given the astringent sap of the tree as both medicine and
as protection against witch craft.

Rowan
This wood can be used as a protection against faerie charms and dairy maids
used it as a charm to stop butter from spoiling when being churned.
Hang branches around the house and outbuildings to bring good luck.
Every croft in Scotland would have its own rowan tree planted outside the front
door for protection. Red ribbons would be tied to the branches to keep witches from
the door. It is one of the most sacred trees in Scottish folk traditions and does not
allow the use of the timber, bark, leaves or flowers except for sacred purposes.

Posted by A World of Magic Myth and Legend at 00:57