Yes it's true! today is officially the first day of spring!
So take no notice of the snow and the hailstones and the freezing rain, it's spring, yippee!
Today, 21st March, the sun enters the house of Aries and he who is born under this sign shall be of good wit and neither rich nor poor. He shall be soon to anger and soon pleased. He shall have damage by his neighbours and he shall have power over dead folks goods. Also a liar and unsteadfast of courage and will take vengeance on his enemies. Until the age of thirty four he shall be a fornicator and wedded at thirty five and if not, he shall not be chaste. And he will live until seventy five.
The woman that is born under aries will be ireful and suffer great wrongs from day to day. She shall lose her husband and recover a better. She shall be sick at the age of five and in danger at twenty five and if she survives she shall be in doubt until forty five after which she will prosper.
Kalender of Shepheardes 1604
Posted by A World of Magic Myth and Legend at 08:23 No comments:

Now is the time that Hares begin their strange and mysterious mating rituals. In 1607 according to Edward Topsell writing in his History of four footed Beast; most people believed that hares were one year female and another year males. Hunters believed at that time that they were hermaphrodites.
There are many strange tales and beliefs surrounding the hare, that it is unlucky to meet one when setting out on a journey, or to mention one by name before putting out to sea, if you must then use  a nickname like Wat or Old Malkin.
And if you see a hare acting oddly it could be a shape shifting witch ( as told in my novel A Lavender Witch) or a were hare which can only be killed by using a silver bullet. 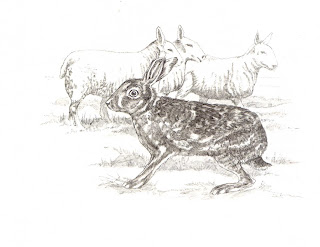 There is a goblin who resides on the Isle of Man called a Phynnodderee,  a very helpful chap but not too bright. He offered to help a local shepherd bring in his flock of sheep from the hills. Much later the goblin trailed into the farmyard exhausted,complaining that the  shepherds small brown sheep had caused him endless trouble when he was trying to round it up with the other sheep. The man was very puzzled when he heard this as all his sheep were snowy white. So he went to inspect the flock and cowering in the middle of the flock was an exhausted small brown hare.
Posted by A World of Magic Myth and Legend at 01:34 No comments: 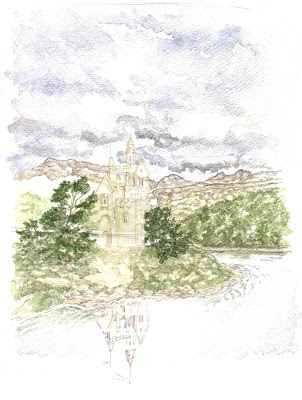 There are rumours of many faerie castles in Britain, one such is Castle Howe
situated on the banks of Bassenthwaite Lake in Cumbria. On misty mornings
or sometimes late in the evening, the reflection of it can be seen in the waters
of the lake but the actual castle is never seen.
Two children disturbed this faerie site and roused their anger when they started
digging in the soft earth with toy spades. Their father saw what they were doing
and sent the family dog over to attract the children's attention, but before the
dog could reach them, it stopped dead in its' tracks as though it were paralysed.
Posted by A World of Magic Myth and Legend at 02:41 No comments: