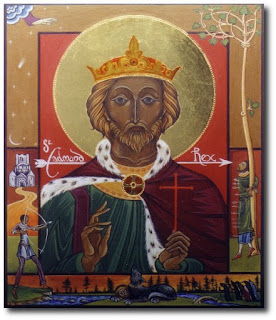 Edmund, King of East Anglia was born of Saxon stock and brought up as a Christian. He became King before 855 until his death in 869. An army of vikings, led by Ingwar, invaded East Anglia  and he led his army out to meet them but was defeated and captured. He refused to renounce the Christian faith and was killed, some believe he was shot with arrows then beheaded. His body was buried in a small wooden chapel near where he died. Around 915 his body was discovered to be incorrupt and so was taken to Bedricsworth later called Bury St Edmunds where a community was founded in 925 to take care of the shrine. His body was later relocated to a large new Norman church and re-enshrined in 1198.
Folklore relates that his head fell into a thron bush and was hidden and when his followers sought it, the head itself called out to them crying 'here, here.' It was found being guarded between the paws of a giant  white wolf.
A miraculous freshwater spring  broke through the soil where the head had lain. Near the site of a Benedictine Monastery near Hoxne is a deep moat enclosing a small island where the spring is said to be located. The ill and infirm visited the spot during the middle ages believing the waters were healing. 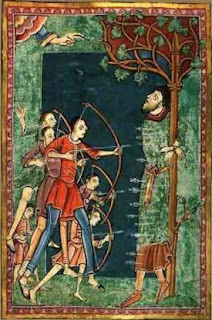 Just south of the village of Hoxne which is believed to be the spot where he was killed is a stone cross that marks the spot of the oak to which Edmund was tied, The memorial reads...'St Edmund the Martyr, Ad 870 Oak tree fell August 1848 by its own weight.'
Near Hoxne lies the Goldbrook Bridge where Edmund is said to have hidden from the Danes. According to legend a pair of newly weds  spotted his spurs glistening in the sunlight and as the Danes dragged him away Edmund put a curse on all bridal couples who ever crossed the bridge. Up until the 19th century many wedding parties refused to cross the bridge and took the long way round rather than chance the curse. 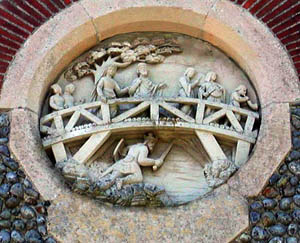 Posted by A World of Magic Myth and Legend at 05:55