St Apollonia's Day and a cure for toothache! 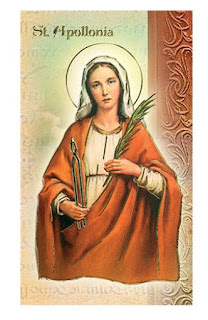 The 9th February is St Appollonia's Day, and is dedicated to the memory of
an aged Christian matron of Alexandria. She was one of a group of virgin
martyrs who were persecuted during a local uprising against the Christians
prior to the persecution by Decius, who was Roman Emperor from 249 to 251.
According to legend her torture included having all of her teeth pulled out
or shattered.

"Her persecutors seized her and by repeated blows broke all her teeth, then then erected outside the city gates a great  pile of faggots and threatened to burn her alive if she refused to renounce her faith. Given at her own request a little freedom she sprang quickly into the fire and was burned to death."
Taken fr om an account written in 1260

For this she has become the patron saint of dentists and those suffering with toothache. 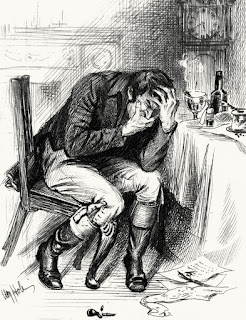 A sure cure for toothache taken from The Homish Apothocary 1561

"The grey worms breeding beneath wood or stones and having many feet, and
when they be touched they do cluster together like porkenpicks. These pierced
through with a bodkin and put into the tooth that aceth allayeth the pain." 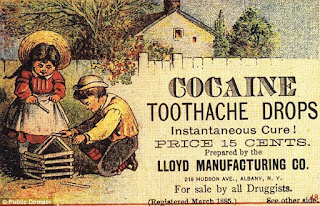 Cocaine was the first local anesthetic to be used but with its addictive side effects it its use was soon abandoned by health care professionals.
No....really?! 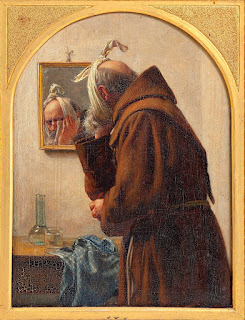 The first written mention of toothache was found on a Sumerian clay tablet which dates from around 5000BC. The tablet is now referred to as ‘The Legend of the Worm’ as in ancient civilisations it was believed that tooth decay and dental pain was caused by tooth worms. This belief persisted until the Age of Enlightenment which was an intellectual movement that dominated the world of ideas in Europe during the 18th century.

A priest -physician Andrew Boorde in the 15th cen-tury recommended a de worming technique for the teeth. ‘ And if the toothache do come by worms make a candle of wax with Henbane seeds and light it and let the  perfume of the candle enter the tooth and gape over a dish of cold water and then you may take the worms out of the water and kill them on your nail.’

Leo Kanner in his article The folkore of the Teeth cites the following remedy from Brandenburg
Germany.
‘ One takes a mouthful of salt and goes with it in the evening silently, without greeting or addressing any-one to the churchyard. There make a hole over the last grave, cross two blades of straw over the hole and spit the salt upon it. Then close the hole with mud and the patient goes home as silently as he came. The toothache will disappear and never come back’

Or another recommendation from the same area in Germany is that the toothache can be relieved by kissing a donkey! 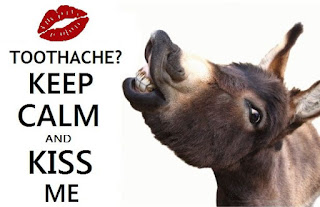 Not recommended by modern day Dentists!


Ancient Greeks similarly believed that a mouth wash made from donkey milk would help promote strong teeth and gums.
If you don’t fancy kissing a donkey there are few other remedies like spitting into the mouth of a frog in the hope that it will take the pain from you or you could suck on the freshly extracted tooth from a corpse!
Or visit your local Blacksmith as they used to perform dental work as well as tending to your horse... 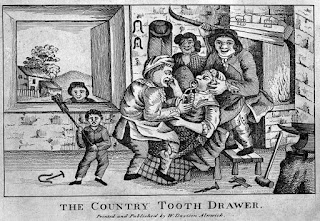 I think that's enough about teeth!

Posted by A World of Magic Myth and Legend at 04:19