The Harvest Home ceremony is now sadly gone but some places still celebrate with a Harvest Supper.
There was a great tradition and pride when the last sheaf of corn was finally cut and the last load taken away. The cart would be decked out with flowers and boughs of ash and oak; the horses would also be covered in garlands of flowers and ribbons. The weary farm labourers, with much merriment and singing, would accompany the cart back to the farm yard.

The last sheaf of standing corn was always treated with great reverence, and was known by many names; the maiden or the Cailleach ( old woman) in Scotland, the neck or ganders neck in western England; the mare in Herefordshire and the Caesg Fedi (harvest mare) and gwrach (hag) in Wales.
It had to be cut in a particular manner; in some areas it was cut by the youngest maiden or lad on the farm and must not touch the ground before being carried home in triumph while in western England and Wales the last standing piece of corn was plaited together and all the reapers threw their scythes
at it until one cut it down, this is called cutting the neck. As it fell he would cry out that he had 'got the neck.'
The men would cry out 'we have it, we have it, we have it.'
'What have 'ee, what have 'ee, what have 'ee,' asked the others.
And the response would be, 'A neck, a neck, a neck.'

It was thought that the corn spirit would flee from the oncoming scythes and retreat to the last sheaf standing, if the spirit was not captured it would flee to neighbouring farms.

Any farmer who is late with his harvest would be mocked by his neighbours. The first finished would send a bundle of corn to his neighbour if he has not brought in his harvest; likewise he will pass it on to his own neighbour if he is behind with his work and so on. This sheaf is called 'the cripple goat' and is seen as a brag or affront to the slower neighbours. It is believed that the name corn dolly is a corruption of 'corn idol'; and that the dolly was used by the spirit as a refuge  during the winter months until the new crop grew in the spring.
On Dartmoor the dolly was kept until Plough Monday which was the first Monday after the twelfth night, it would then be cast into the first furrow and returned to the soil. This, the farmer hoped, would bring a good harvest  the coming year, if this wasn't done the crop would fail. Here the dolly would be the guest of honour at the harvest home celebrations and preside over the eating and drinking.


The wagons would be followed by the young girls of the farm who would try their best to douse the singers in water while in Somerset they would wait at the back door of the farmhouse with a pail of water and try to prevent the bearer of the last sheaf from entering; this custom was to 'cry the neck'.
If he managed to enter, his prize was a kiss.

The last sheaf was often dressed in woman's clothing or plaited into a corn dolly which would then preside over the Harvest Home feast. This dolly would be placed reverently in the farmhouse and kept for luck until the next year.
The Harvest Home dinners were variously called horkeys, mell suppers, kern feast, cylacks and in Penzance they were known as gool-dize (from the cornish gol deis: a feast of ricks)
These crude bundles of corn were considered to be a traditional offering to the Goddess Mother Earth; in some areas it would be carried around the village, tossed into the river to bring enough rain for the following year or burnt and their ashes strewn around the farm for luck. 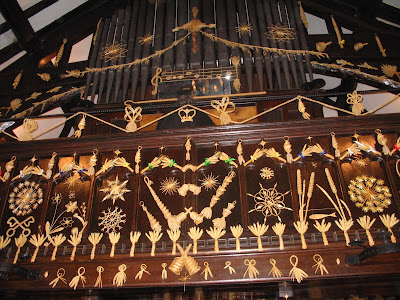 Examples of corn dollies decorating the church at Siddington near Macclesfield

This song probably accompanied one of the many drinking games that went on during the harvest home supper.
One from Sussex involved putting a cup of beer on the flat crown of a top hat. Holding this by the brim with both hands, the player had to raise  the cup to his lips and drink the contents before the fourth line of the song, and thereafter he had to flick the cup up, reverse the hat and catch the cup in it. If he failed or spilt any beer he had to try again.

It was also customary that the final song would thank the farmer and his wife.
'Our days work is done, to the farmhouse we steer
To eat our supper and drink some brown beer
We'll eat and we'll drink health to him and his wife
Here's prosperity be with them all the day's of their life.'