Dartmoor, a place of mystery, made famous by Arthur Conan Doyle's
'Hound of the Baskervilles', said to have been inspired by the local legends
of the Yeth Hounds that hunted across these windswept moors. 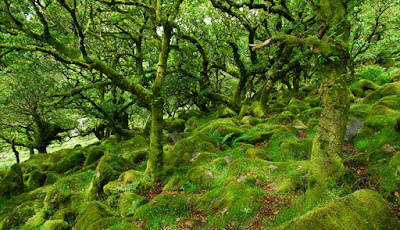 Wistmans Wood on Dartmoor is the last remains of an ancient woodland and is the
home of these hounds. They are a fiercesome sight, jet black, with smoke and flames snorting
from their nostrils.
From the centre of the woods they start their wild hunt along with a demonic huntsman
called Dewer, they race across the wild moorland looking for lost souls.
They head for Dewer Stone near Bickleigh where they disappear.
If any mortal is unlucky enough to see them it means banishment to a distant land, and
speech with the Huntsman means death.

One well known local legend illustrates the
danger of encountering the hounds and huntsman
known as Dewer.
A local farmer had been visiting the fair at
Widecombe and after spending a few hours in
the local tavern decided it was time to set off for home.
Staggering along the lonely road across the
moor he came across the Hounds and Huntsman.
Too drunk to feel afraid he demanded some game
from  the shadowy figure.
With a cold laugh the Huntsman tossed to the
man’s feet a bulging sack.
It was too dark a night to examine  the contents, so he swung it to his
shoulder and carried it home.
When he got inside he started to open the sack
on the kitchen table as he told his wife of his
encounter with the dreaded Huntsman.
She was just marveling on his lucky escape when
the dead body of his eldest son fell out of the sack.

Crocken Moor, a rocky granite outcrop which is believed to be the
centre of Dartmoor.
The guardian spirit of the moor, Old Crocken, rides out from here on a
skeleton horse. On dark and stormy nights he rides to Wistmans Wood and
releases the hounds and Dewer to hunt lonely travelers.
Any meeting with him forebodes bad luck.

‘The gurt old spirit of the moors, Old Crocken himself, grey as granite,
and his eyebrows hanging down over his glimmering eyes like sedge,
and his eyes as deep as peat water pools.’
Sabine Baring Gould 1899

Dartmoor is supposed to have a temperate climate but having visited this area
many times once you step onto the moor you enter a different world; not just at
risk from the weather but also from the danger of being pixy led.
The moor takes its name from the River Dart which starts at East Dart and West Dart then becomes a single river at Dartmeet.
It leaves the moor at Buckfastleigh then reaches the sea at Dartmouth

This area has the largest concentration of early Bronze age remains in Britain.
During this period the weather was warmer and the moor heavily wooded so it would not
seem as inhospitable as it does today.
The trees were cleared by the early settlers who established the first farming settlements.
There is still evidence of their occupation near Haytor.
The fields that these early settlers cultivated covered an area of approx 39 sq miles,
the division of the fields called 'reaves' ( banks of earth and stone) are still clearly
visible in some areas. 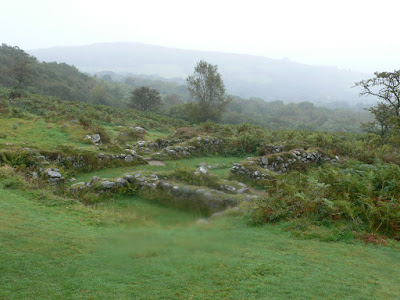 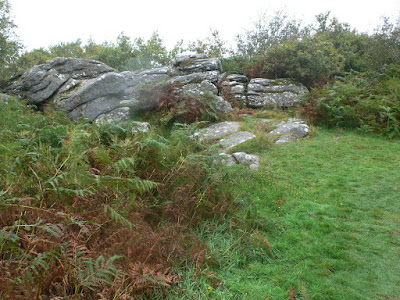 Down into the woods where pixies and headless horsemen
and the wish hounds roam... 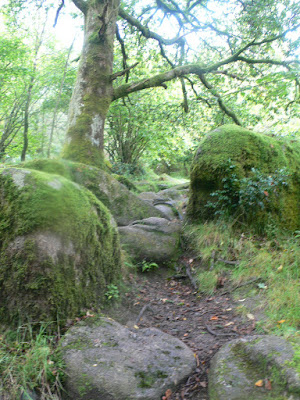 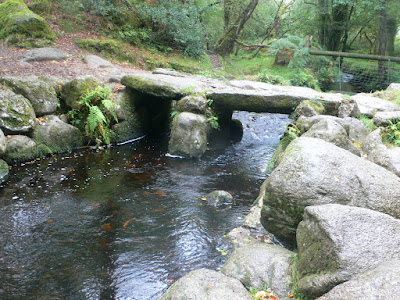 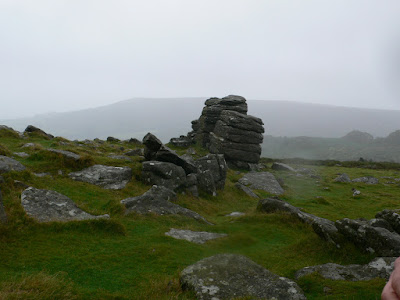 Put your ear to the sides of Tors and you will hear the pixies knocking deep
within the rock, or if you are really lucky you will be able to hear the bells being rung in their underground villages.

Posted by A World of Magic Myth and Legend at 09:29