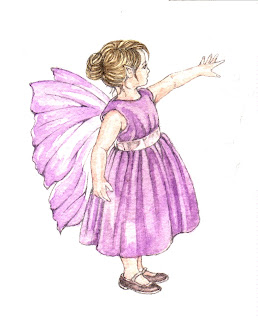 There lived at Rothley in Northumberland a very clever little boy that
once outwitted a faerie girl.
One night despite his mothers warning that the faeries would get him
if he didn't go to bed, he stayed up alone playing in front of the fire.
Down the chimney flew a beautiful little faerie girl and joined
in the boy's game.
'Ainsel' was her name she informed the boy and he, being rather quick
and cheeky, said he was called 'My Ainsel.
They stayed playing together until the fire began to die down, the little boy
stretched and rose to stir the fire with a poker. One of the embers fell on
the faerie's foot and as she screeched out that she was burnt, a voice echoed
down the chimney asking who had burnt her daughter's foot.
With a cloud of soot the faerie's mother stood before the little boy asking
again who had burnt her foot.
'My Ainsel, My Ainsel!' she crowed, delighted that she would get the
little boy into trouble.
'Then in that case,' said the mother. 'What's all the fuss about?'
And with that she shooed  her protesting daughter back up the chimney.

Posted by A World of Magic Myth and Legend at 02:03