The Moon and Flowers of Harvest.. 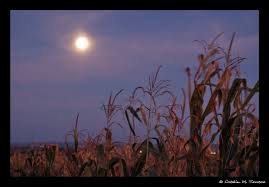 According to Aubrey author of Observations in 1685
You should observe the Harvest Moon, for
'The moon doth always piss, when she is pale
When red, she farts: when white, she wipes her tail.

Countrymen observe a certain rule, that a dripping moon ( that is, perpendicular)
presages wet, especially the moon being of a cloudy and blackish colour in a
clear sky; and that the weather will last so a good while.'

The Scottish Bluebell or Harebell is often referred to as Harvest Bells, a native perennial which flowers from July to Sept. This is also called Fairy Caps and Fairy Ringers, it is guarded by the magical har,e which is associated with the sidhe, so it is unlucky to pick it.

The moon gazing hare is an ancient symbol of fertility, and is always an attribute
of lunar deities. The moon-gazing hare was especially important to early Britons. In
nature hares can be seen and in ancient times, often seen in this "moon gazing" pose.
Chinese moon gazing hares were thought of as gazing up at what he sees as his ancient
ancestor, the Moon Rabbit in the moon.


The Moon gazing hare and spring

The hare signifies the fertility of Spring, of new life as the sun returns to the earth.
Light and dark are of equal length yet the light is growing stronger.


What the moon gazing hare represents

The myth of the Moon gazing hare reflects ancient beliefs. Pagans believed that seeing
a moon gazing hare would bring growth, rebirth, abundance, new beginnings and
good fortune. The hare is known to be sacred to the goddess Eostre and eventually
became known as the Easter bunny. In some countries, it is customary to eat hot cross
buns around the time of Easter and Christmas; the cross on the bun is said to represent
the four quarters of the moon. These buns were originally pagan offerings and were
often hung from rafters to scare off evil that lurked in houses.
The more common bluebell,which  flowers in the spring, is also a very potent faerie flower and a bluebell wood is a very dangerous place to stray into.
Another useful flower for this time of the year is the Dog Daisy or Harvest Daisy:
'The whole herb,stalks flowers and leaves, boiled in posset drink, is accounted an excellent remedy for asthma, consumption and difficulty of breathing. A decotation of the herb cures all diseases that are occasioned by excessive drinking of cold beer when the body is hot.'
John Pechey The Compleat Herbal of Physical Plants 1694
Posted by A World of Magic Myth and Legend at 01:02