Redcap, most evil of the border goblins 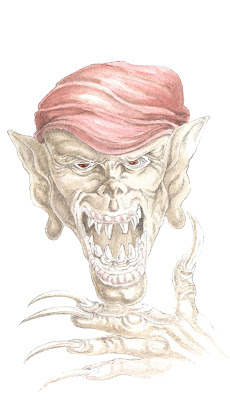 Now this is an evil resident of the faerie world! He is called Redcap and is well known for being the most evil of the border goblins. He is short and wiry with ragged pointed teeth and sharp claws like steel. Redcap lives in any old abandoned castles or towers that he can find, he is especially fond on any with a violent history.
Hermitage Castle in Roxburgh was the home of Lord Soulis, a man with an evil reputation, and keeping him company was  a Redcap who acted as his familiar.
Redcaps are fond of killing people by rolling boulders onto them or tearing at them with his sharp claws before drinking his victims blood. His name comes from the fact that his cap is dyed in his victims blood!
Faeries and Folklore of the British Isles
Posted by A World of Magic Myth and Legend at 06:53