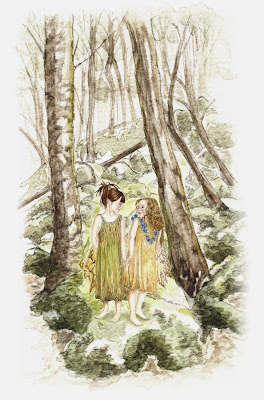 Fairyland is generallly believed to be a beautiful place where perpetual summer reigned. Gervase of Tilbury tells how a Derbyshire swineherd followed a sow through a cave and came to a country where all were reaping, though the Derbyshire hills were covered in snow. Sometimes this fairy land was lit by supernatural means, no sun or moon being visible.
In a Cornish folktale, a young woman called Cherry from Zennor, takes service with an unknown gentleman who brings her to an underground country lit by a strange and lovely light. Here she has to tend a little boy and it is not until she rubs some of his ointment on her own eyes that she realises she is in faerieland. As soon as her master knows that she can see him as he really is he transports her back to Cornwall, leaving her on the exact spot where they first met. And she is never again able to find her way to his house. 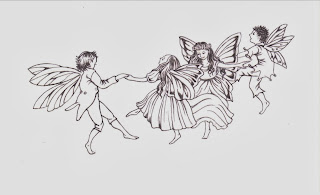 Numerous stories tell of people who have danced with the faeries for they thought was just a few hours and in fact was a year and a day. Two men met the faeries in a lonely place; one joined in with their dance but the other returned home. When his friend did not appear, he was accused of murder but managed to stave off arrest until a year and a day after meeting the faeries. He escaped taking a knife with and headed back to the place where they met the faeries. There he saw his friend dancing tirelessly in the faerie circle. He flung his knife into the ring seized his friend and manged to drag him away. His friend was astonished to hear what had happened, as he though he had only been dancing for a couple of hours.
A more tragic tale is that of King Herla who was invited to the wedding of the faerie King. Herla and his men attended the magnificent feast held in the palace which was entered through a cave. After three days of feasting Herla prepared to leave for home. The Faerie King gave him a small hound and warned him that none of his company must alight from their horses until the hound leaps to the ground. When Herla reached his home he found everything changed, old landmarks had changed, the people spoke a strange language and his family and friends were not to be found. He asked a shepherd for news of his Queen and the man replied that he knew nothing of her except that two hundred years ago there was Queen of that name whose husband had disappeared and never seen again. In the meantime the Saxons had invaded Britain and were now the rulers of the country. The three days in faerieland had been three hundred years on earth and the world that Herla knew had vanished. At this terrible news some of his men leapt from their horses and were immediately turned to dust. The rest with the King at their head wandered hopelessly through the land seeking refuge. Some say that they can still be met riding over the hills, but according to Walter Map they all plunged into the River Wye and perished in the reign of Henry II.

Posted by A World of Magic Myth and Legend at 07:06