The festive season is fast approaching 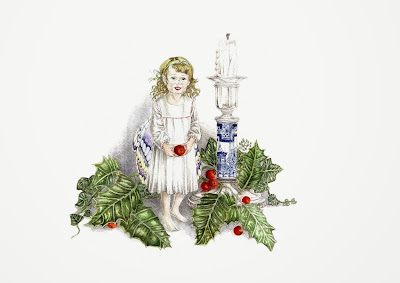 Christmas seems to be getting earlier every year, I saw Christmas cards etc for sale in our local supermarket as early as September this year. The trouble with this, it is such a big build up by the time Christmas Day has arrived everybody just wants it over! Just mention 'Christmas' and everybody groans!
This isn't how it should be, we seem to have forgotten that it is a season of joy not just for buying socks and dodgy jumpers.
So I am going to waffle on about old traditions associated with the festive season for the next few weeks to try and get myself in the mood, even seeing the Cocacola ad didn't help!
Well, I haven't made my Christmas cake or pud yet and November is the traditional time for this, apparently.
It was always a tradition in our house to stir the mix for the cake and have a wish, this is usually done with the pudding mix tho. The traditional threepennybit, the ring, thimble and other charms put in to the puddings are auguries of the future; the thimble for the predestined old maid, the ring for those who are to be married within the year and so on. Bearing a flaming pudding into the dining room harks back to the old fire festival of Yule. This festival sprang from the Scandinavian Yule, from which many of our older Christmas customs come from, this was a sun festival when the Yule log was lit once again.
And the mince pies are supposed to remind us of the spices brought by the Three Wise Men to Bethlehem. To eat twelve mince pies between Christmas and Twelfth Night ensures twelve happy months in the coming year. The amount of mince pies consumed over Christmas in our house will probably ensure a decade, at least, of good fortune!

Posted by A World of Magic Myth and Legend at 23:54