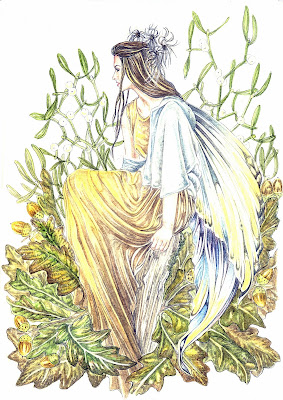 Mistletoe is one of the most popular plants for decorating the house at Christmas along with Holly and Ivy, and apart from been used as a decoration the plant has  healing properties as well.

This is an excerpt from 'Faerie Flora'
The mistletoe that grows on the oak was sacred to the ancient Celts. it would be cut on the sixth night of the new moon at midsummer and the winter solstice by white robed priests. Using a golden sickle or knife the plant would fall into a cloth held by members of the order, taking care that the sacred plant did not touch the ground. Traditionally two white bulls would be sacrificed at the same time.
Sprigs of mistletoe would be distributed for the protection of homes against thunder and lightening.
The plant was considered to be one of the most magical as the Celts believed that it bestowed life and fertility and the white berries contained the sperm of the gods.

Decorating the home with mistletoe is an important part of the Christmas festivities; this is a survival of the Druid traditions, but the 'kissing under the mistletoe' has its origins in the Greek festivals Saturnalia, which is usually held during the Yule season to celebrate the birth of Saturn.
One berry is removed with each kiss until none remain; any young girl standing underneath a bunch of mistletoe could not refuse to be kissed otherwise she would not be married in the following year. In some parts of England it is customary to burn the mistletoe on the twelfth night, otherwise all the young people who had kissed beneath the mistletoe would never marry.
In Worcestershire kissing bunches were kept hanging from the beams all year until replaced by new ones at Christmas. The old bunches were then burnt, a steady flame indicates a faithful husband and a spluttering flame an irritable one!
In times past Mistletoe was forbidden in churches as it was seen as a heathen plant; but at on time in York cathedral it received full honours. It was ceremonially carried to the high altar on Christmas Eve after which a universal pardon and liberty for all was proclaimed at the four gates of the city for as long as the branch lay on the alter.
The mistletoe  is known as the plant of peace; especially to the Scandinavians it is sacred. This has its origins in the legend of Freya/ Frigga the Goddess of beauty, love and marriage. Frigga was the wife of Odin. Legends tell that when she shook out her bedding snow would fall to earth. She was also the goddess of divination and she forsaw the death of her son Baldur.  He was shot by a dart made of mistletoe and died, for three day every element of the earth, air fire and water tried to revive him. But it was Frigga who managed to restore him to life, her tears of joy turned into the white berries of the mistletoe. And for ever after warring factions would make peace under a branch of mistletoe.
The practice of this strange custom in York using the plant makes sense when you realise   the city was for nearly a hundred years the capital of the Scandinavian  Kingdom founded by Halfdan in 875.
Posted by A World of Magic Myth and Legend at 00:59