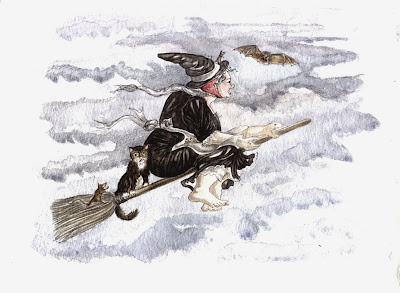 As it is getting close to Halloween I  thought I would concentrate on a few witchy and spooky things!
First of all mandrake, every good witch needs this herb...
It is a poisonous perennial and is a member of the nightshade family and it has powerful magical properties.
The root which resembles the figure of a man or woman has a strong unpleasant odour and is used in philtres as an aphrodisiac.
In medieval times it was believed that the mandrake grew best beneath a gallows tree as the roots would spring up from the semen and other body drippings of the hanged corpse. The gallows were traditionally placed at crossroads, a place long associated with magic and evil. Animals would be sacrificed here in honour of Hecate, the goddess of witchcraft. It was here that witches would call up devils and demons, as some spells were considered to be more effective if cast at a crossroads. The corpses of the condemned would be cut down and buried there as it was believed that their ghosts would be confused by the choice of roads and be unable to find their way home.
Local witches would gather the roots at night for use in their spells. The plant would be washed in wine and wrapped in silk and velvet and fed on sacraments stolen from a church.
Witches would also take the right of a murderer from the gallows and using mandrake make a 'Hand of Glory'. This would be used when the witch was making a potion as it was believed it intensified the potency of the spell.
Further info on mandrake and its uses can be found in 'Faerie Flora'
Posted by A World of Magic Myth and Legend at 09:08