The Faeries of Weardale.. 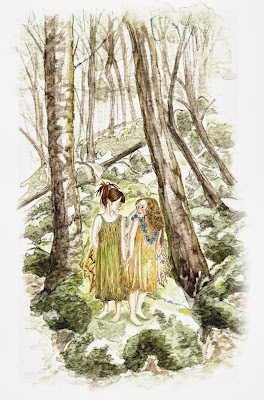 The locals all know that the Weardale  have more than their fair share of Faeries and that they can be anything but friendly at times. So when a local Farmer found  that his young daughter had strayed into a Faerie cave, he was terrified that they would take the little girl in revenge. He quickly consulted the wise women of the village, following her advice, he silenced everything in the house that night, the clock, the fire in case it crackled, the dogs were fed and put outside, in fact he did everything to have complete silence for when the Faeries arrived, for they cannot work their magic in silence.
At the stroke of midnight he heard them ride into the farmyard  and stop, obviously puzzled by the lack of noise, until upstairs the little girl’s dog started barking; t he one thing that he had forgotten.
By the time he had reached her room the little girl was gone.
The next morning as soon as it was light he visited the wise women again. The only way to get his daughter back was to give the King of the Faeries three gifts which he could not refuse and would be forced to hand back the little girl.
The three things were a real puzzle to the Farmer, he did not know what they meant or how to get them. Something that gave light without burning, a live chicken without a bone in it’s body and he had to collect a limb from a living animal without spilling any blood.
The Farmer walked slowly home trying to work out this riddle when he was distracted by a commotion in the trees, a kestrel had hold of a lizard by the tail, which  promptly shed it and disappeared into the  grass. So he had one of the gifts and by the time he had got home he had worked out another part of the riddle; one of his hens had been sitting on a clutch of eggs for 15 days and he knew that although alive the chick’s bones would not yet have formed. So now he had two gifts safely collected. As for the third he puzzled all day until the night began to draw in, so he made up his mind to go to the cave and hope that he would find the third gift on the way. It was quite dark by the time that he reached the hills and he could clearly see a green glow in the grass. A glow worm was the third gift. The farmer called to the Faerie King to release his daughter and as the he was just about to refuse, the three gifts were laid in front of him, the Faeries disappeared and the little girl came running out of the cave.
After that she stayed close to home, knowing better than to meddle with the Faeries that live in the Dale.
Faeries and Folklore of the British Isles
Posted by A World of Magic Myth and Legend at 02:40