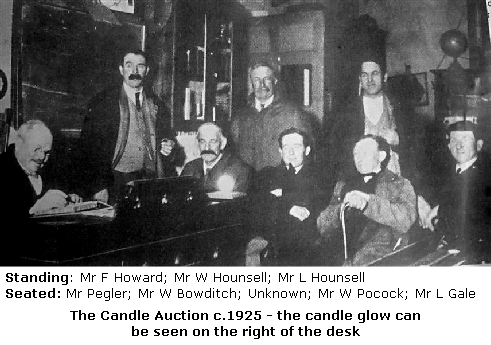 The Candle Auction in Tatworth, the small village where I live takes place annually on Old Lady Day, 6th of April; this date apparently is linked to land tenure.

Records for this auction go back as far as 1832 but previous records were burnt in a fire so it is unclear how long this custom has been going on, and it is now the only one that takes place. Chedzoy and Congresbury also used to hold a candle auction, but both died out in the mid 1900's.

The piece of land auctioned is known as Stowells Meadow, a meadow and watercress bed. Only certain people, those who rent or own property in the parish, have the right to attend the meeting which is held at The Poppe Inn.

A length of tallow candle, about an inch long, is lit on a board hung from the pub ceiling –where it is invisible to the assembled hopeful bidders; the highest bidder before the flame goes out wins the field for the year. It takes around 20 minutes and a traditional supper follows of bread, cheese and watercress. The custom started when local farmers set up the Stowell Court to regulate landuse in the area following the enclosure of common land

The watercress bed is long gone although it used to give a good income to the lucky bidder. Stowells Meadow is now used for grazing as the land is too boggy for much else.
My daughter can testify how boggy it is as she made the mistake of trying to walk through it one day on one of our rambles. It took quite a lot of pulling to get her out, and left her wellies behind buried deep in the mud!

There is a good account of it in Ruth Tongue's Somerset Folklore, although she refers to the  meadow as 'No Man's Land'

One old farmer in the district had fallen on hard times and wished to bid for the meadow as he hoped the profits from the watercress beds would help him back on his feet. Everyone wanted him to have it so only two farmers turned up on the day to bid against him. The inch of candle was lit and one of them made his bid quickly, it was kindly meant but to everybody horror the candle began to splutter.
The poor man's son gave his father such a tremendous dig in the ribs he almost choked as he got his bid out. If he had of coughed the bid woul;d not have counted and he would have been fined.
The candle recovered and burnt brightly on and everyone looked sadly at the old farmer who was now in deep despair. It was no use the other farmer who hadn't already bid trying to cough before he put his bid in as the Auctioneer would have probably known what was going  on.
The second man winked at the first and started to wrinkle his nose, he took out a red handkerchief, 'You can't sneeze in in here while the candle is lit,' said the Auctioneer hopefully looking at the candle which was down to a quarter of an inch by now.
So the second man carefully tiptoed to the door with the red handkerchief to his nose, the candle flickered but recovered as he opened the door. Unseen by the Auctioneer he flicked his finger to his sheep dog waiting outside. Barking with joy that the long wait was over leapt up at him wagging his tail and the candle went out. The Auctioneer solemnly explained that the poor dumb beast could not be held to blame and amid great good humour the poor man was given the field for the year. Then everyone went cheerfully for the yearly supper with the  watercress. The old man never guessed how his friends and fellow farmers had helped him.

Posted by A World of Magic Myth and Legend at 04:02