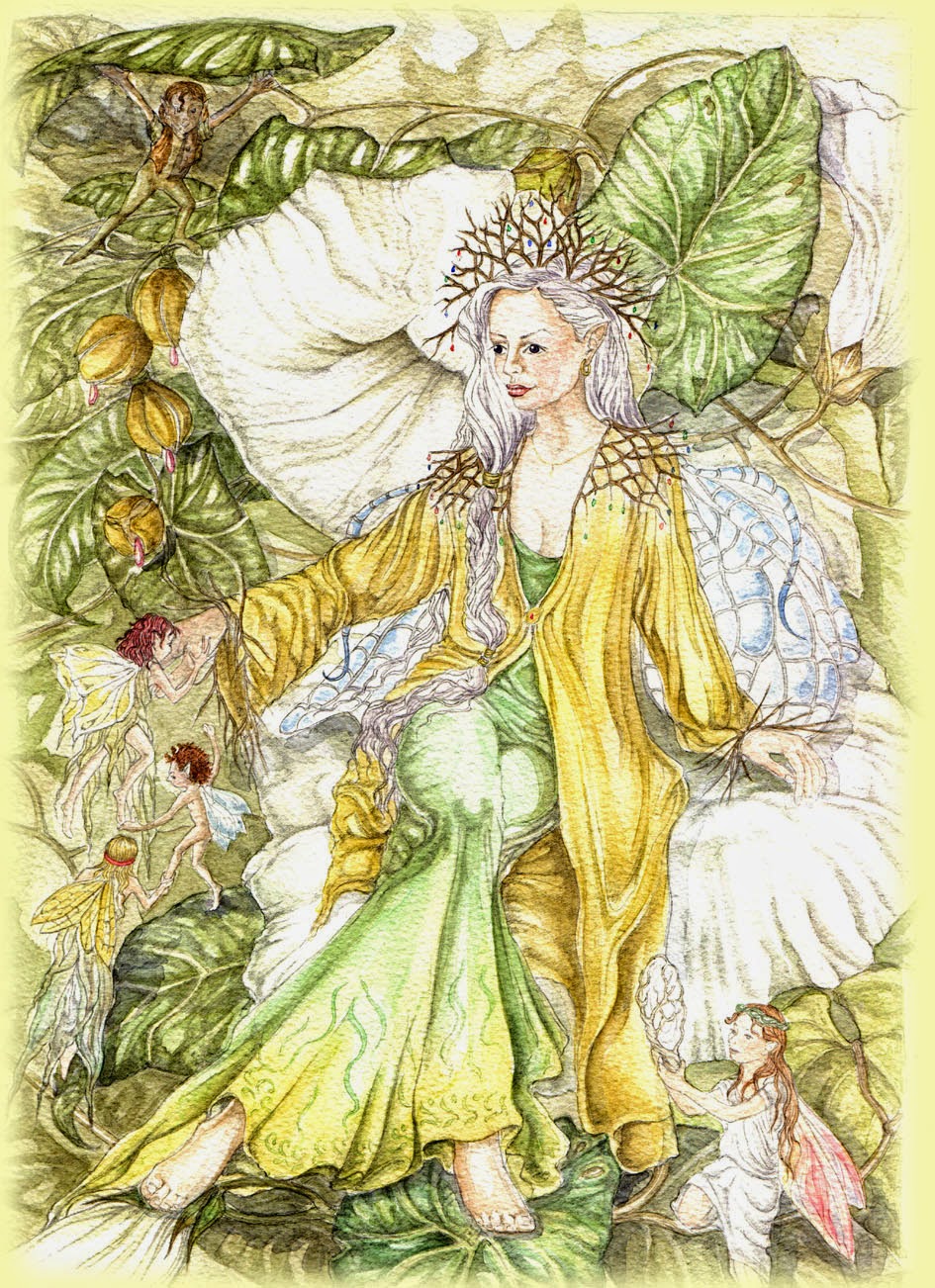 True Thomas The Rhymer:
Many people have been seduced into leaving the mortal world and travelling to Faerieland; some never to be seen again, for once there it is very difficult to escape. One such was Thomas, the young Laird of Erceldoune who, one May Day, saw a beautiful woman riding towards him across the grass. He was so smitten by the woman that he promised then and there to love and stay with her for ever if she would only give him a kiss: although in some versions it’s more than a kiss he received! Once the kiss had been given Thomas watched in horror as the woman’s appearance changed before his eyes, her hair turned gray and her face became lined and haggard, her clothes became tattered and there before him stood an old crone where two minutes before there had been the beautiful woman with whom he had fallen in love.
Thomas knew that he could not go back on his promise and as she made to leave the hill where they had met, he gave one backward glance to the mortal world. Then followed the old crone to a cave in the side of Eildon Hill and from there into the otherworld. They travelled for many days in pitch black surrounded by strange sounds until at last they came to an enormous cavern and in the middle stood a Faerie Castle surrounded by a beautiful garden.
Thomas turned to the old crone to exclaim at the wonder of the place and there in place of the old crone stood the beautiful woman as she had been before.
Thomas gazing on her face then knew that it was the Faerie Queen herself that he had made his promise to.
To Thomas, it seemed as though he had only been there for a few days and when the Faerie Queen told him that in fact he had been there for seven years he could not believe it. She warned him that if he stayed another night then he would be bound for ever in Faerieland and for the sake of their love he would be given a chance to return to his mortal home. With a blink of her eye Thomas found himself once again standing on Huntlie Bank. The Faerie Queen gave Thomas a parting gift: the ability to be a master harpist and also that he would answer every question with truth. For seven years his wisdom and prophecies were sought by many. But he never forgot the beautiful Queen that had stolen his heart; and one day he received a summons from her; Thomas walked out of his home and was never seen again in the mortal world.


True Thomas lay on the grassy bank,
And he beheld a lady gay.
A lady that was brisk and bold,
To come riding o’er the ferny brae.

Her skirt was of the grass green silk,
Her mantle of the velvet fine,
And on every lock of her horse’s mane,
Hung fifty silver bell and nine.

True Thomas he took off his hat,
And bowed low down to his knee,
All hail thou virgin, Queen of Heaven,
For your like on Earth I ne’er did see.

Oh no, oh no, True Thomas she said,
That name does not belong to me,
I am but the Queen of Fair Elfland
That has come for to visit here with thee.

She turned about her milk white steed
And took True Thomas up behind,
And  aye when’er the bridle rang,
The steed flew faster than the wind,

For forty days and forty nights,
They wade through red blood to the knee,
And he saw neither sun nor moon,
But heard the roaring of the sea.

Oh they rode on and further on,
Until they came to a garden tree,
Light down, light down, you lady fair,
And I’ll pull off that fruit for thee.
Oh no, oh no, True Thomas she says,
That fruit may not be touched by thee,
For all the plagues that are in hell
Are upon the fruit of this country.

But I have bread here in my lap,
Likewise a bottle of red wine,
And before that we go further on,
We shall rest, and you may dine.

When he had eaten and drunk his fill,
She said Lay your head down on my knee.
And before we climb yon high high hill,
I will show you wonders three.

Oh do you see that broad broad road
That lies by the lily leven?
Oh that is the road of wickedness,
Though some call it the road to Heaven.

And do you see that narrow narrow road
All beset with thorns and briars?
Oh that is the way of righteousness,
Though after it few enquire.

And do you see that bonny bonny road
Which winds about the ferny brae?
Oh that is the road to Fair Elfland,
And together there you and I will go.

But Thomas you must hold your tongue
Whatever you may hear or see...
For if one word you chance to speak,
You will never get back to your own
country.

And he has gotten a coat of woven cloth,
Likewise the shoes of velvet green,
And till seven years were past and gone,
True Thomas ne’er on earth was seen.

Faeries and Folklore of the British Isles
Posted by A World of Magic Myth and Legend at 06:40