No... swallows do not hibernate in the mud 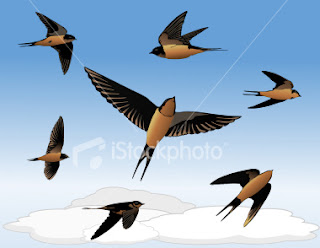 For years the disappearance of swallows in the autumn  was a great mystery.
Many years ago country people believed that they hibernated in the mud at
the bottom of lakes and ponds or that they hid in holes and bushes and
remained torpid until the spring.

Olaus Magnus in 1550 wrote 'In the northern waters, fishermen oftentimes
by chance draw up in their nets an abundance of swallows, hanging together
like a conglomerated mass. In the beginning of autumn, they assemble
themselves together among the reeds by ponds, where allowing themselves
to sink into the water, they join bill to bill, wing to wing and foot to foot.'

A worried naturalist wrote in 1776 'But if swallows hide in rocks and caverns,
how do they, while torpid, avoid being eaten by weasels and other vermin?

The swallows are seen dashing low over lakes and ponds catching insects
which I suppose is why they believed this.
The vast majority of British breeding sparrows leave during September,
they flock together and start to fly south at a leisurely pace.
It is different during the spring migration however, experienced birds can travel from
South Africa in about five weeks at a speed of about 300k per day!
Posted by A World of Magic Myth and Legend at 01:32