The Lavender Witch is now available in paperback

Now available in paperback from Amazon or www.magic-myth-legend.co.uk 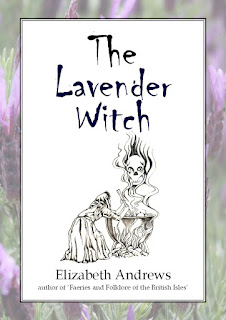 While I was researching my book Faerie Flora I came across the strange but true tale of Hannah Henley, a well known witch from Devon whose bruised and bloody body was found hanging over a branch of a tree near her home. It was believed by the villagers that she had been taken by the devil even tho there was glass and blood inside the cottage. It was the strangest tale and started me thinking how this could have happened so I stopped FF ms for a while and wrote The Lavender Witch.

The Lavender Witch is a chilling ghost story based on the strange but true events surrounding the death of Hannah Beamish, accused of being a witch by a wealthy farmer in a small remote village where she lived in the early 1800’s.
One hundred and seventy years later these strange events, only now remembered by a few, come to light when Kitty and Gordon move back to the Devon village where they were born, they buy an old orchard from a farmer and build a small house. All is fine until they move in and Kitty spends her first day alone in their new home.
Over the course of their first week in the house chilling apparitions appear and events spiral out of their control bringing the past and present together until the truth emerges as to what really happened on Castle Hill.  Was Kitty and Gordon’s return to the village a coincidence? And what secrets are the elderly sisters Sybil and Queenie keeping?  To save their home and their sanity they must finally put the ghosts to rest

And yes this strange tale is based on fact!!

Posted by A World of Magic Myth and Legend at 07:56