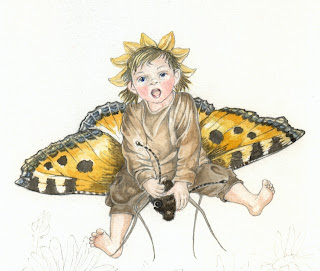 Faeries will not hesitate to steal un-baptized children, they are especially partial to blondes, replacing them with changelings.
These may be either an old wrinkled elf who wants an easier life or a replica made of wood which under a faerie spell will appear to be alive. This replica often appear to sicken and die, the grieving parents will then bury the wooden changeling.
It is said that faerie births are getting rare and new stock is needed to replenish the blood line but in Scotland there is a more sinister motive as the babies are used to pay the Devils tithes which come due every seven years.
In earlier years many babies that were born ugly or deformed were believed to be a changeling which had horrific consequences. It was believed that one way to get the real mortal child back was to mistreat the changeling until its faeries family exchanged it again.
Placing the substitute on a red hot poker or putting it on the fire or whipping it on the top of a faerie hill was believed to make the changeling reveal itself. The changeling would then disappear and the  real child left in its place.
Men and women were also taken, in 1894 in Clanmel, County Tipperary Bridget Cleary fell under suspicion of being a changeling by her husband Michael. According to him she appeared more refined than usual and had grown an extra two inches. Although she protested her innocence he tortured and burned her to death ' to make the witch confess'.
Michael Cleary buried the remains of his wife but they were later discovered and he was charged with manslaughter and was sentenced to twenty years hard labour.
In 1843 A Penzance newspaper reported the case of a man who had been charged with ill treating his young child. The child had suffered continous beating from the man and his family  since birth and from the age of 16 months had been made to live outside in the outbuildings. The man's excuse was that he believed the child was a changeling and that his real child had been taken by the faeries and amazingly enough the case was dismissed against him! 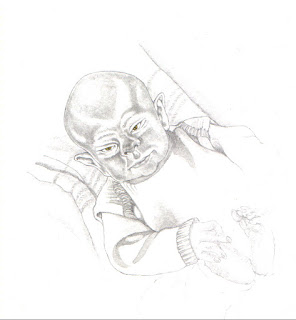 Posted by A World of Magic Myth and Legend at 02:50