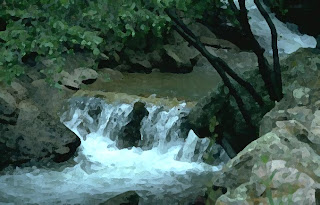 Two farmworkers were on their way to work one day when they saw a mermaid rising from a local pool. She told them of the treasure that had lain at the bottom of the pool for many years and that they could take as much of it as they wished. The two men could not believe their luck so when the mermaid dived back under the water they waded into the muddy water to follow her.
She re -emerged suddenly carrying a huge lump of gold that was as big as the mens heads . They were so astonished that one man swore that 'by God he had never had such luck in his life'. Hearing the oath the mermaid screamed and dived back into the water taking the gold with her. And that was the last they ever saw of the mermaid and the treasure.

Posted by A World of Magic Myth and Legend at 07:30