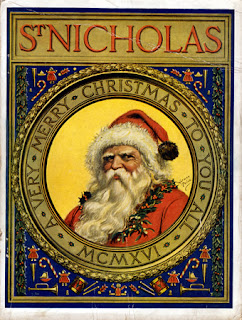 The Feast of St Nicholas takes place on the 6th Dec

St Nicholas was a fourth century bishop of Myra in Asia Minor, who was so pious
even as a baby that he would only suckle on fast days.
He is said to have saved three maidens from prostitution by covertly throwing three
golden balls for their dowries through their windows by night, and to have
miraculously revived three murdered boys pickled in a brine tub.
So he is the special patron saint of children as well as pawnbrokers who use the
three golden balls as a sign.
His nocturnal kindness is perpetuated in the gifts left by 'Sinte Klass' the Dutch
American version of his name.
Posted by A World of Magic Myth and Legend at 01:31