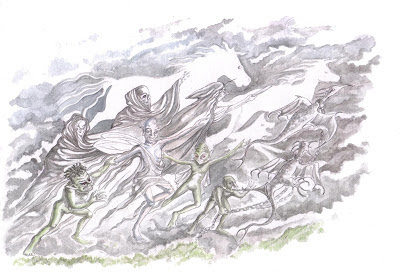 Well Halloween is over for another year.. we had a steady stream of little elves,
goblins and monsters coming to our door. The sizes got progressively larger
as the night wore on! We just had a few sweets left for our last caller,
all got soaked of course as it was such a foul night but it didn't seem to
dampen their spirits!
Although of course I should have been handing out soul-cakes but I
think they preferred the sweets!

The Feast of All Saints or All Hallows which is also Samhain the pagan
Celtic New Year festival when stored fruits and crops were blessed and
the dead remembered.
On this night  soul-cakes are made and given out usually to the poor
who in return would pray for the souls of the departed: and the returning dead
were supposed to share in the cakes.
A child born at this time is supposed to have second sight and all of
November's children will fortunate and beloved.

November's child is born to bless
He's like a song of thankefulness.

On all Souls Day Tindle bonfires should be lit to guide the souls out of purgatory.

There is an old custom in Herefordshire to hire the poor to attend funerals.
They would be paid to take upon themselves the sins of the deceased.
The corpse would be brought out of the house and laid upon the bier then a loaf of
bread would be handed to the sin eater over the corpse. He would eat this
along with a bowl of beer. Once he had done this and received his payment
he would take upon himself all the sins of the deceased and
free him or her from walking after they were dead.