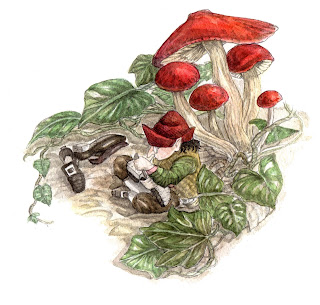 The Faerie Shoemaker otherwise known as Leprechaun spends his time
around clear pure streams, also has a liking for cool dark cellars.
Easily recognisable from the red cap he wears, he also wears two leather
purses on his belt. In one a silver coin and in the other a gold coin.
The silver coin always returns to his purse even after being given away.
He only hands out the gold if he needs to buy his freedom from a captor.
But keep your eye on him, one blink and he will vanish and the coin will turn to dust.
When he is not drinking and smoking ( which he is very partial to!) he is busy
making shoes for the faerie folk. The Leprechaun is well paid for his services and
has amassed quite a store of gold which he keeps in a large crock.
He hides it well but usually it can located buried at the end of the
rainbow where it touches the earth.

Posted by A World of Magic Myth and Legend at 09:05