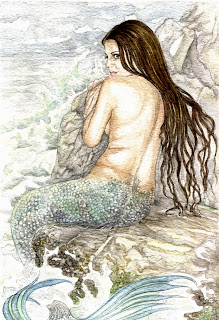 A mermaid was spotted off the coast of Wales near Aberystwyth in 1826 by a
farmer who lived close to the shore. According to his report the mermaid looked
as though she was washing herself in one of the rock pools, at first he thought
it was just a mortal woman until he saw her beautiful tail  spread out on the
rocks beside her. His children joined him and watched the mermaid  for a time from their
vantage point on the cliffs, as they were there for so long his wife becoming alarmed
by their absence and came to find them. Her approach scared the mermaid and she slipped
quickly back into the sea. The family continued watching the mermaid as she  swam slowly
down the coast towards Dyfed.

It used to be thought that mermaids were heavenly fish spirits that fell to earth every now
and then to perform ritual dances. They remove parts of their clothing to enable
them to dance like the selkies of Scotland, if these fell into the hands of a mortal
then the mermaids and the selkies would have to stay with the mortals until
their garments were returned or found.

In Celtic mythology mermaids were considered as monsters hungry for the lives of men and although they are described as half human half fish a better description would be half faerie  half fish as one of the better known attributes is the granting of wishes in return for her freedom if caught in a
fishermans net.
Mermaids are more malignant in some places than others and the Mermen are more dangerous than their female counterparts but that story is for the next blog... 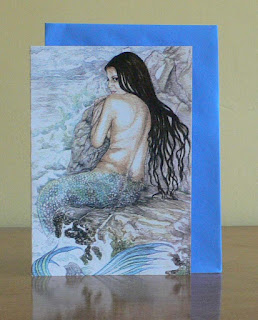 card available from www.magic-myth-legend.co.uk
Posted by A World of Magic Myth and Legend at 01:44