Just returned from a long weekend in the city of Edinburgh, lovely old buildings!
We were enjoying walking through the streets to get to the castle when we came across the Ghillie Dhu, I think it was a pub or club. Beautiful old carved door, it invited visitors in but we were not swayed by the pull of ale! We were off to scale the slopes of the castle.
The Ghillie Dhu are tree spirits that live mainly in birch thickets and I didn't see
any thickets nearby but then again the park was just over the road so
perhaps they were city dwelling Ghillie Dhu's.
They are known to hide among the moss and leaves to avoid the sight of
mortals and tourists in this case!
They are best avoided as they can be unfriendly and have been known to
capture people, tie them up with ropes of ivy and carry them off to faerieland. 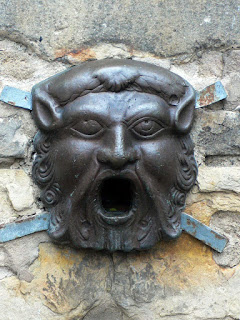 I'm not sure if this is one, he was carved on an old fountain near the castle.
But I think we did find their front door! It is about a foot high and set in to a wall.
We didn't knock! 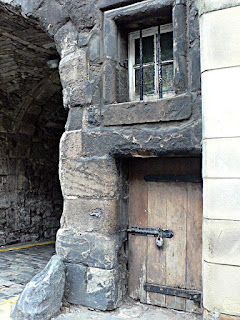