Hannah and the tulips

This is a well known tale from the west country about an old woman called Hannah who lived deep in the woods in a cottage. Running alongside the cottage was a small garden where she grew a few vegetables but most of it was given over to a huge bed of the most beautiful scented tulips. These blooms were her pride and joy and she gave them more care and attention than her poor straggling vegetable plants. After a days work in the garden she would sit at the cottage door just admiring the beautiful blooms until the light faded.
One clear night Hannah was woken from her sleep by the sound of singing and of babies laughing, she crept out of her bed and nervously peered through the window into the garden but there was nothing to be seen. The sounds were coming from the tulip bed, worried about her lovely plants she threw a shawl around her thin shoulders and hurried out into the garden but as the latch clicked on the cottage door the singing stopped, all was quiet in the garden and nothing could be seen stirring amongst the plants.
By first light Hannah was already out in the garden checking her flowers for damage but she found they were untouched and there was no sign of anybody ever being there.
The next night was fine and clear and again Hannah was woken by the sound of singing and children laughing but caught no sign of her nighttime visitors. In the morning she again checked the tulip bed but this time she had taken her glasses with her and she could plainly see the little footprints in the soil.
Hannah was delighted to think that she had faeries in the garden and spent the whole day carefully weeding and tending the tulip bed even though her vegetable patch sorely needed tending.
That evening Hannah left the front door open so that she could slip out quietly if she heard her little faerie visitors again and then settled down into bed. Her eyelids grew heavier, Hannah could stay awake no longer and fell asleep.
The old woman suddenly woke, the moon was shining in at the window and she could hear the sound of singing quite plainly through the open window. She slipped out into the garden and walked down the path to the tulip bed. There in the moonlight Hannah could see the tiny faerie mothers standing next to a tulip bloom, gently rocking them backwards and forwards like a cradle while inside lay a little faerie baby. 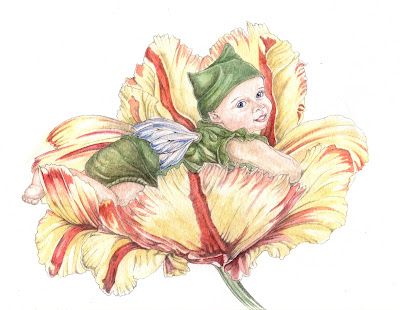 From then on Hannah tended her tulips carefully every day and as a thank you the faeries used their magic to make the vegetable thrive and they grew so well that soon Hannah had more vegetables than she knew what to do with.
The came the day that the little old woman died and her cottage was sold. The family that moved in did not like tulips so they dug up all the bulbs and planted parsley in their place. This so enraged the faeries  that at night they pulled up the parsley plants and shredded them. Each time the new family tried to plant something it would be  pulled up and destroyed until finally nothing would grow in the garden at all.
It was only on Hannah's grave that the tulips still grew big and beautiful, carefully tended by the faeries.

Faerie Flora- Elizabeth Andrews
Posted by A World of Magic Myth and Legend at 01:18