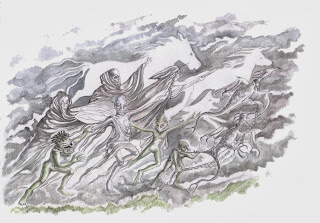 Eggardon Hill Fort is considered to be one of the best hill forts in Dorset, dating  from
around 300 BC, the hill fort is an Iron Age construction, although it has never been
excavated by archaeologists  and is in an excellent position for defence, with its
steep sloping sides giving wide visibility over the surrounding countryside.
The hill fort was constructed in a series of banks and ditches dug around a central
defensive compound, similar in construction to Maiden Castle close by. Within its
boundaries are two Bronze Age barrows as well as more modern remains including
an octagonal arboretum or coppice thought to have been used to help ships
navigate and by smugglers!

During certain phases of the moon a ghostly horde of faeries, demons and witches hunt
across the hill, they scour the ancient hill fort looking for the souls of the long dead.
Their eerie cries can be heard across the hill and anybody who ventures out when the
hunt is abroad is in certain peril.
Faeries and Folklore of the British Isles

This account was described by Edward Waring in his 1977 'Ghosts and Legends of
the Dorset Countryside'.
A farmer was out on the hill late one night, when he heard in the distance the sound of a
huntsman's horn, and the baying of a pack of hounds. Looking across he saw 'the form
of a man running for dear life' through a hedge and ditch. The hounds appeared next,
'urged on by a tall black figure striding at an unearthly pace, with sparks of fire
flashing from his boots'. They seized their quarry before he got down into the valley
and the farmer realized that what he had seen 'must be the Devil tormenting
a lost soul'.

Many visitors to the hill describe an eerie feeling while walking the hill, and cars have reported to have lost power while driving past and coming to a complete standstill.
I have visited the hill many times and have not freaked out, in fact it was a beautiful
day and I felt very peaceful up there. We were too busy flying kites to notice any demons!
Posted by A World of Magic Myth and Legend at 02:12