A friend of ours moved into a large mansion house, Badgworthy Court in the north of Somerset, not the whole house but just part of it. It has been occupied in this way for many years. As it is an enormous building the upkeep must have been too much and the owners decided to sell it off. So our friend decided that he would do some work on the neglected garden to the side of the house, the area surrounding the house was manicured lawns etc but to the side running along the stream was completely overgrown.
So he cleared all the way up this deep gully which is about half a mile long until he came to a mound of ivy, so he decided to clear that as well. Buried deep inside the tangle of vines was a door! On either side was a huge stone wall so he began to clear that as well. At this point he did have to get in some help, I think it was a digger, so anyway all the ivy was pulled off and he eventually managed to push his way through the door.
Inside was an enormous walled garden. head high in brambles and nettles. He began to clear this as well! to one side he found a long victorian greenhouse against the wall which obviously had once been a heated one, as behind that was the potting shed and the room where a fire had heated pipes which then led into the greenhouse to warm it. 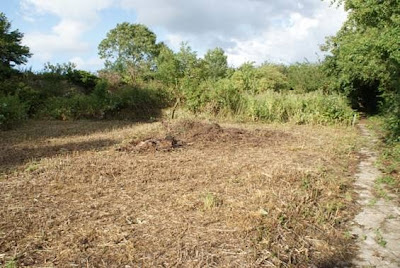 The greenhouse is to the left under all the green stuff! A path goes all the  way round the garden and in the middle is a deep well for water which is fed by the stream and in the middle of all this he has just found the remains of another huge greenhouse. Wow! but that is not all, he got to the other side of the walled garden and found another door in the wall and beyond that another huge walled garden. There are more buildings here, possibly a gardeners cottage and workshops, all in  a very ruined state, there are even a few abandoned tools laying about. This part is going to be levelled by another digger as so many saplings have sprung up and it is too large to clear by hand.
The other residents at the court had no idea all of this was there!
All this has been abandoned and empty for so long but our friend has seen somebody up there, he believes it was the spirit of a young girl. When we first visited the garden in May I was aware of somebody there, but I got the impression it was of a man, I felt him most strongly around the potting shed behind the green house so I think it was an old gardener wondering what we were up to!

This is what the greenhouse would have looked like, but now it is completely rotten with all the glass gone. It is so far gone it cannot be saved, such a shame.
We visited last week and I am looking forward to our next visit to see what he has done!
It makes me quite envious, I wish it had been my garden!

Posted by A World of Magic Myth and Legend at 11:24