The time of apples and blackberries..

Autumn is upon us again, this year has gone so quickly! My apples have been picked and now I am getting ready to pick blackberries from the hedge row. Yesterday I picked a small bag of sloes to make sloe gin for Christmas, that was a great success last year, I just wish I could drink! Never mind at least I don't get any awful pictures of  me being taken while under the influence! 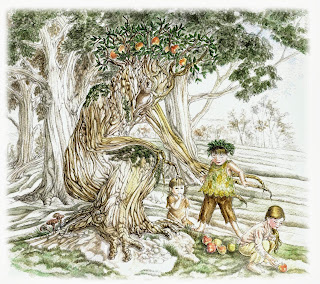 Somerset is a county full of apple orchards and produces great cider so there are
many folk tales surrounding the orchards in this county.
One popular tale is that of Lazy Lawrence, a wild colt that inhabits the orchards
of the west country and protects the crops from apple thieves.
The story goes that an ageing widow had reason to be grateful for his protection.
She lived in a small village in Somerset and owned a fine orchard, from which she
made a good living. But one year she fell from one of the apple trees whilst pruning
and was unable to leave her cottage for quite some time.  So she called upon her
neighbour for help but he was a mean spirited man and refused. But although
he would not aid the widow he decided that he would help himself to the apples anyway
and perhaps sell them at the local market. The neighbour waited until dark then
crept down the lane carrying a wicker basket. He was so busy picking the apples
that he did  not notice Lazy Lawrence leap the fence and make straight for the thief!
The colt nipped the man in the backside and then chased him round and round the
orchard until he collapsed exhausted on the grass under the trees. The colt pranced
up to the man and as he gazed up at the frisking pony, it's green eyes froze the
man to the spot. He was still there the next morning unable to move and next to
him was the basket full of stolen apples.

Posted by A World of Magic Myth and Legend at 07:16