The name drives from the local  legend of three spinsters living nearby, not spinsters
as we know the term but 'spinsters' in the woollen sense...wool spinners. 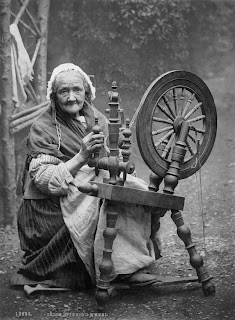 The tale goes that one morning the three women set out to take their baskets of spun
wool to the local wool trader and stopped for a rest in the lane bordering
the 'Three Stones' field.
For some reason they decided to re-erect the three granite slabs then replace
the huge capstone on top, hence the name Spinsters Rock!
Although in 1848 Samuel Rowe suggested the theory that the Three Spinsters is a link
with the three Fatal Sisters, Urd, Verdani and Skuld of Norse Mythology  who lived
at the base of Yggdrasil, The World Tree.
They were said to weave the destiny of the world and would visit any newborn to
determine its destiny. 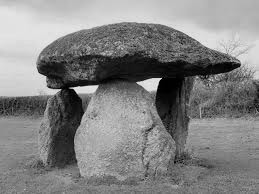 The Spinsters Rock is a Neolithic chambered tomb, kown as a Dolmen or Cromlech, found on Dartmoor near Drewsteighton and  is the best surviving example in the county.
The word Dolmen is derived from the Celtic words daul, a table, and maen, a stone.
Originally covered by a mound of earth or stones. The capstone alone wighs 16 tons and is 3.65m long by 2.7 wide. 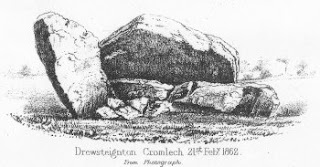 The tomb collapsed in 1862 after the surrounding field was ploughed during a very wet season prior to planting a crop of winter wheat, yes they had bad weather then as well! In fact the summer of 1860 and 1862 was recorded as being  the wettest and coldest across England since their records began.
There is divided opinion who was responsible for its restoration either local Vicar Rev W. Ponsford or a Mrs Bragg of Fulford.

We visited this site a few weeks ago , it quite an impressive Dolmen and the picture does not do it justice. It was being guarded by three malevolent sheep and later that night a fierce storm blew up, the wind howled and shrieked and I could hear 'fell voices on the wind' so I think we might have disturbed the three spinsters in some way!
Posted by A World of Magic Myth and Legend at 06:18